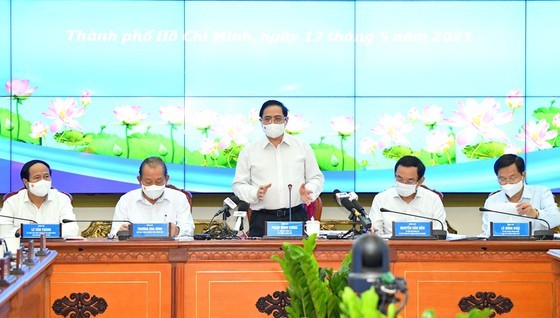 Speaking at the opening of the meeting, PM Pham Minh Chinh said that HCMC was the first locality that the Government visited and worked with after being consolidated.

According to the PM, based on reports and proposals of HCMC, the Government Standing Committee and relevant Government members had discussed thoroughly. In this meeting, the Government and HCMC would discuss issues of mutual concern to seek solutions.

“The contents of the meeting are numerous and rich, requiring high quality, so it is recommended that all participants focus their minds and thoughts on discussing and addressing directly the issues," the PM stated clearly the spirit of the meeting.

Reporting to the delegation, Chairman of the HCMC People's Committee Nguyen Thanh Phong expressed his honor when the PM, deputy prime ministers, and the Government delegation had prioritized HCMC as the first locality in the country to meet after taking the position of the heads of the Government. 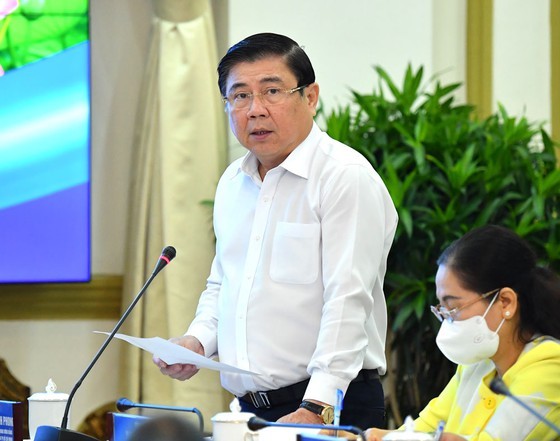 Mr. Nguyen Thanh Phong, Chairman of the People's Committee of HCMC, speaks at the meeting with PM Pham Minh Chinh. (Photo: SGGP)
Especially, he proposed and recommended the Government some contents to ensure the development of HCMC in the coming time. Among these contents are recommendations involving the hierarchy and decentralization for HCMC; difficulties and problems, along with proposals related to the implementation of Resolution No.54/2017 of the National Assembly on piloting specific mechanisms and policies for the development of HCMC; the equitization and operation of State-owned enterprises.

At the same time, HCMC also made specific recommendations on medium-term public investment from 2021 to 2025, including the proposal to add medium-term capital from the central budget to support the city to balance investment capital for key construction projects and projects with regional connectivity, which are significant for the promotion of fast and sustainable socio-economic development.

Especially, there are also many proposals related to Thu Duc City, including the approval for the building of specific projects, mechanisms, and policies to develop Thu Duc City; infrastructure development and investment attraction to develop Thu Duc City, along with the proposal to resolve and accelerate the phase two of the Intel Products Vietnam Project.
As for hierarchy and decentralization for HCMC, the city proposed the Government approving the policy of assigning the Ministry of Home Affairs to preside and coordinate with HCMC and central ministries and agencies to soon develop the project to issue a Decree to replace Decree No.93/2001 on the hierarchy of some fields for HCMC in the second quarter of this year. Currently, some contents of Decree No.93 are no longer appropriate and do not create favorable mechanisms for the development of HCMC.

Regarding difficulties and problems in implementing Resolution No.54/2017 of the National Assembly on specific policies for the development of HCMC, the city has four recommendations:
Firstly, the city proposed the PM to support the policy and direct the Ministry of Finance to preside the completion of the project on adjusting the budget retention rate for HCMC and submit it to the competent authorities for approval in 2021. Specifically, the city proposed adjusting the budget retention rate in the period from 2022 to 2025 to 23 percent, to increase budget revenue submitted to the Central government and create a premise for the city to develop quickly and sustainably.

According to the Decision, Saigontouris is on the list of State-owned enterprises to be equitized, the State holds over 50 percent to less than 65 percent of the charter capital. Meanwhile, Saigontourist is managing four hotels with historical, architectural, and artistic values that need to be preserved in the downtown, comprising Ben Thanh - Rex Hotel, Cuu Long - Majestic Hotel, Hoan Cau - Continental Hotel, and Kim Do Hotel.

Firstly, for Thu Duc City to truly become a new growth motivation for HCMC and the whole Southern economic region, HCMC proposed the PM to direct central ministries and agencies to coordinate with the city to develop the project on the specific policies for Thu Duc City and submit to the Government in the second quarter of this year.

Secondly, HCMC proposed the PM to allow it to continue to adjust the infrastructure construction project of the Northern residential area and complete the North-South arterial road according to the previous approval of the PM to supplement the construction of four bridges; dredge canals and dig the central lake and new canals into the Build-Transfer project of technical infrastructure for the Northern residential area and complete the North-South arterial road. The above additional works will be balanced payment from the expenses saved during the construction of infrastructure of the project and from the amount of money that the investor must pay additionally (if any) in accordance with the audit results of the State Auditor when identifying again the value of land use rights of previously-allocated land lots.

Thirdly, the city proposed the PM approving the investor's proposal for phase 2 of the project of Intel Products Vietnam on incentives for its plan to increase investment capital.