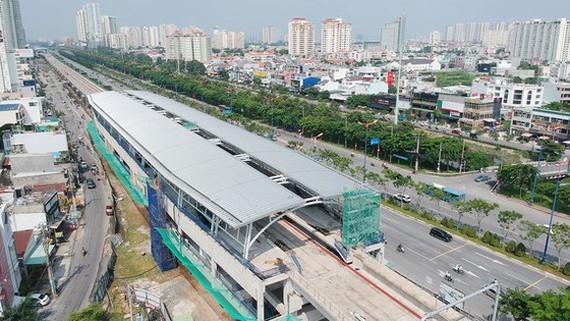 New urban areas along the first metro line in HCMC
The Ho Chi Minh City Department of Planning and Architecture has just submitted the draft regulation on urban architecture management of the southern largest city to the municipal People's Committee for consideration. In the draft regulation, the Department of Planning and Architecture has divided the Hanoi Highway and metro line No. 1 Ben Thanh - Suoi Tien into 10 areas with rankings from A to L.

According to the department’s draft, about 10 urban development projects will be built along a portion of the line that stretches 14.83 km through 11 wards in Thu Duc City.
Under the draft, new urban areas will be developed with a high concentration plus synchronous social and technical infrastructure, and multi-functional and specialized service centers. Important cultural and historical works will be preserved and promoted. The Hanoi Highway is an important gateway to the East - North of Ho Chi Minh City.
Following the draft, Thao Dien metro station and station square are located in the A section or Thao Dien with an area of 37.74ha and a length of 0.97km along Hanoi highway. Multi-functional high-rise buildings with an architectural work of the main highlight character will be built within a radius of 200m around the station and in the land area adjacent to Quoc Huong Street.
Meanwhile, the An Phu metro station and the Cat Lai intersection are planned to be built in the B section or An Phu with an area of 71.66ha and a length of 1.6km along the Hanoi highway with high traffic volume. Multi-functional high-rise buildings are allowed up to 40 floors.
Additionally, the Rach Chiec metro station, Cat Lai intersection, and public transport will be in the C section or Rach Chiec with an area of 33.43ha and a length of 0.98km along Hanoi highway. Multi-functional high-rise buildings with a maximum of 26 floors will be constructed within a radius of 200m around the station.
Architects proposed preserving the landscape around the area of Phuoc Long peninsula and renovating the existing residential area. Moreover, the location of the Phuoc Long metro station will be in the D section or Phuoc Long with 127.03ha. In the future, multi-functional high-rise architectural complexes with 45 floors will be built here.
The Binh Thai metro station, Binh Thai crossroads with Ring Road 2 are in the 1.8-km E section with an area of 82.43ha along the Hanoi highway while Thu Duc metro station, Vo Van Ngan and Le Van Viet routes, Thu Duc intersection overpass, Thu Duc University Village are in the F section - Thu Duc with the area of 38.43ha.
The G sector is the place where the Thu Duc Water Plant, Thu Duc intersection, Thu Duc overpass, mainly warehouse land and existing residential quarters are located. The H section or the High-tech Park is home to the metro station High-Tech Park, the intersection of Station 2, industrial land, warehouses and yards, existing residential areas, Suoi Cai canal crossing Hanoi highway.
The New Mien Dong bus station is located in the L section with a total area of 37.75ha. Presently, a metro depot combined with Mien Dong Bus Station and an existing residential area are in the section. Along the highway is an area of warehouse land - vacant land.
When the infrastructure is completed, the value of land will significantly increase and the state can later sell or auction it for investors to operate.