Speaking at the announcement ceremony of the appointment decision which was held at the headquarters of the Phu Nu TPHCM (HCMC Women) Newspaper on December 21, Head of the Propaganda Department of the City Party Committee, Phan Nguyen Nhu Khue congratulated Ms. Ly Viet Trung on her new working position.

He hoped that Ms. Trung and all staff members of the Phu Nu TPHCM Newspaper will continue contributing to the newspaper’s development, not only provide information of women's activities and movements but also provide articles on various social issues.
For her part, Ms. Trung expressed her thanks to staff members of the Phu Nu TPHCM Newspaper, the Standing Board of the Party Committee of HCMC and the Ministry of Information and Communications for trusting her with new role.
Editor-in-chief of the Phu Nu TPHCM Newspaper is a big mission, requiring constant effort by the leader and all staff members. So she expected all the staff members to side with her to further develop the newspaper, she said.
Ms. Ly Viet Trung was born in 1970 in the Mekong Delta province of Bac Lieu. She has bachelor’s degrees in Russian and English languages, and studied in the Maxim Gorky General University in Sverdlovsk.
She has over 20 years of experience working in the Sai Gon Giai Phong Newspaper, and took roles of Head of International and Foreign Affairs Department, Head of SGGP English Edition, Member of the Editorial Board and Deputy Editor-in-chief since July, 2013. 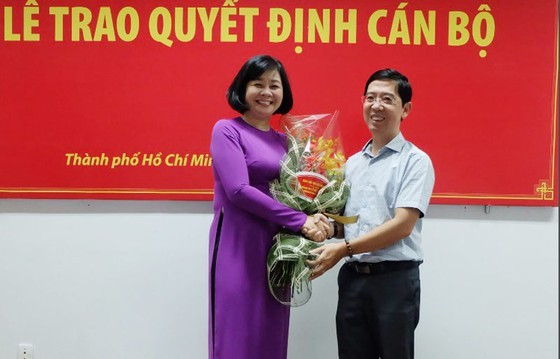