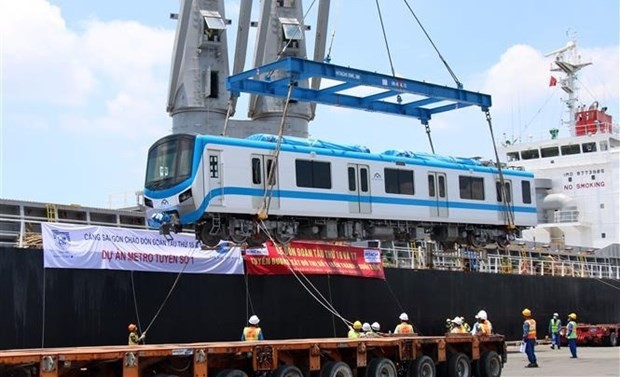 The line will use three-carriage trains made in Japan. Each train, 61.5 meters long, is able to carry 930 passengers and run at 110km per hour on elevated sections and 80km per hour underground.
Nguyen Quoc Hien, Deputy Head of the HCMC Management Authority for Urban Railways, said the arrival of the last trains marks the completion of import to move to a new phase of trial runs, which are set to be initially carried out at Long Binh depot.
About 90.5 percent of the metro line project has been completed.
Contractors and relevant units have pledged to make the utmost efforts to complete and put the metro line into operation by 2023 in celebration of the 50th founding anniversary of Vietnam-Japan diplomatic ties.
Metro Line No. 1, nearly 20km long, has a total investment of over VND43.7 trillion (US$1.9 billion) and consists of three underground stations and 11 over-ground platforms. It was initially scheduled for completion in late 2021 to run commercially in 2022, but then delays hit due to the pandemic and procedure-related problems.