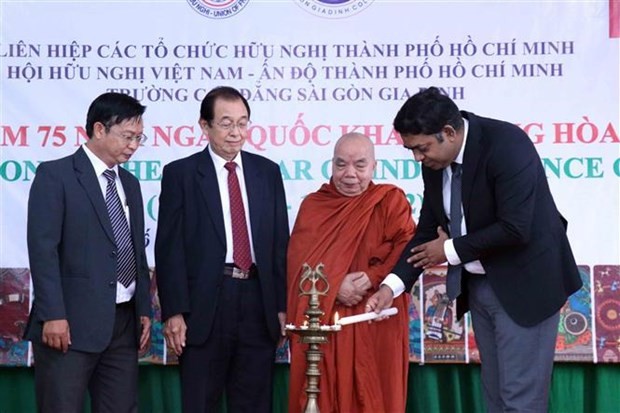 Indian Independence Day marked in HCMC. (Photo: VNA)
Chairman of the Vietnam - India Friendship Association (VIFA) in HCMC spotlighted the long-lasting traditional friendship between Vietnam and India, saying the two countries have always supported each other in their struggles for national independence in the past, and in the national construction and development at present.
Lap expressed his wish to for further coordination and support from the Indian Consulate General in HCMC and the Indian Business Association in Vietnam in organizing people-to-people events in the city, contributing to consolidating and developing the good traditional friendship and solidarity between the two nations.
For his part, Indian Consul General in HCMC Madan Mohan Sethi affirmed Vietnam is always the most important partner of his country in Southeast Asia.
According to the diplomat, now is the most appropriate time for India and Vietnam to further promote cooperation activities, especially economic, political, security-defense ties, and people-to-people exchange.
He revealed that the Consulate General has been carrying out many activities to mark the 50th founding anniversary of Vietnam – Indian diplomatic ties such as cultural, arts and cinema exchange activities, and promoting tourism – investment cooperation, and people-to-people exchange, saying that these are hoped to further strengthen understanding and the relationship between the two countries in general, and between India and HCMC in particular.
The diplomat promised to do his utmost and work closely with HUFO to effectively implement people-to-people exchange activities, actively contributing to lifting the bilateral relations to a new height.