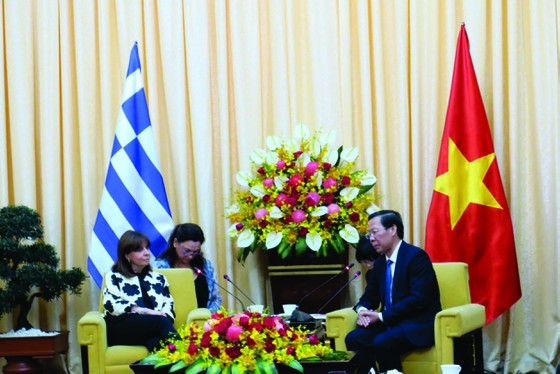 Mai said that the city hopes to receive the exchange of experience, technology transfer and cooperation from Greece in the fields of maritime and logistics, which are its strengths.
It is ready to enhance collaboration in tourism development with Greece, as both sides boast potential and see great room for cooperation, he said.

As a socio-economic and cultural hub of the country, the city is willing to act as a bridge to bring cooperation between the two countries to a higher level, Mai said, adding that it welcomes delegations of the Greek government, ministries, agencies, localities as well as Greek businesses to exchange and seek opportunities for collaboration.

Greek President Katerina Sakellaropoulou said it is necessary for Vietnam and Greece to further strengthen cooperation in the future, especially in areas where Greece has advantages such as education, cultural exchange, historical relic preservation amid climate change.

She also mentioned the need to enhance trade and investment ties, because the free trade agreement between Vietnam and the EU will create an important foundation for deepening bilateral relations in the near future.

Appreciating the priority areas of cooperation that the city's leaders have suggested, the Greek leader said she hopes that this visit will open more opportunities for collaboration between Greece and Vietnam, including HCMC, especially in delegation exchange and economic cooperation.