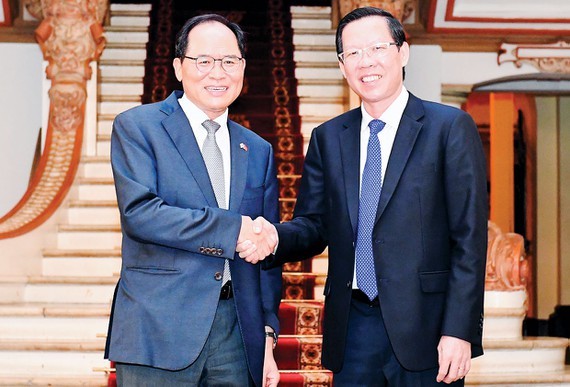 This was the statement of Member of the Party Central Committee, Permanent Deputy Secretary of the Ho Chi Minh City Party Committee, Chairman of the Municipal People's Committee Phan Van Mai at a meeting with Ambassador of the Republic of Korea to Vietnam Park Noh Wan on his working trip in the city yesterday afternoon.
Amid the blossomed relationship between Vietnam and the Republic of Korea, chairman Mai said that the cooperation relation is being boosted in many fields, including economy and trade.

Ho Chi Minh City has had active contributions and benefited from the relationship between the two nations; and currently, the city has established cooperative relationships with many localities of the country.

The city leader affirmed that the local authorities would continue to promote the relationship and create favorable working conditions for the Korean diplomatic agencies and community in the city.

Furtherly, the two sides need to strengthen cooperation in the fields of investment, trade, diplomacy, culture and people-to-people diplomacy to achieve the best results this year.

As for the plan of celebrating the 30 years of diplomatic relations establishment between Vietnam and the Republic of Korea, Mr. Mai proposed the Municipal Department of Foreign Affairs implement cooperation with the Korean diplomatic agencies operating in the city.

At the meeting, the city leader was also unanimous in organizing a dialogue conference between HCMC leaders and Korean businesses. Regarding removing obstacles for Korean investors’ projects in HCMC, specifically, the expansion project of the Korean International School in the city, cooperation and implementation of Ben Thanh- Tham Luong Metro Line and the Tan Van - Nhon Trach project under Ring Road No.3 project. HCMC will continue to promote the above projects and create favorable conditions for delegations of Korean experts to work in the city.

The Korean ambassador sent his thankfulness to the city's warm welcome for his working delegation, and he congratulated the city for overcoming the tough time of the Covid-19 pandemic. Besides, Mr. Park Noh Wan hoped that Ho Chi Minh City would play an important role in promoting the relationship between Vietnam and RoK, and Ho Chi Minh City leaders shall continue to listen to ideas and initiatives of the Korean businesses in the sectors that the city is interested in development.