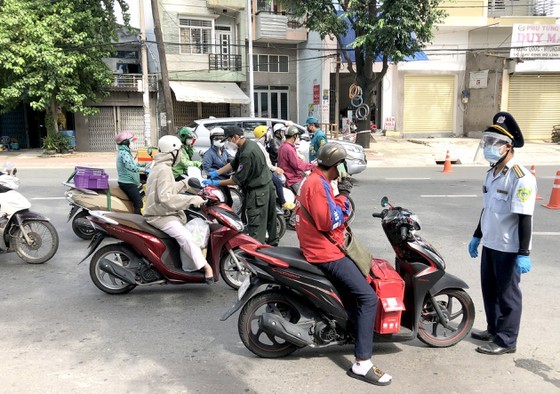 At a checkpoint on Nguyen Kiem Street in Phu Nhuận District, the functional force only randomly check the QR code issued by the Movement Declaration website to avoid traffic jams.

At checkpoints on the streets of Bach Dang, Cong Hoa, Tan Son, Cach Mang Thang Tam in Tan Binh District, due to a density of traffic users in the morning, the force on duty only check required documents also to avoid congestion.

Other checkpoints in Binh Thanh District and Go Vap District follow the same procedure of not examining QR codes or documents in rush hours so that there is no traffic jams for too long.

However, shippers must stop at these checkpoints to display their QR codes, to have their goods checked, which takes up to 15 minutes each and makes them more susceptible to virus spreading.

The movement declaration via the website suckhoe.dancuquocgia.gov.vn still poses certain inadequacies. The form is too long with 18 sections. After finishing entering necessary information, sometimes there appears a notice of ‘information is required’ for certain fields. In addition, the detail about blood type is not popular to many Vietnamese, so people might make random choice.

Both traffic users and officers on duty at checkpoints admitted that due to such a long form with so many complicated details, the declaration time takes longer than necessary, and thus making this process unsafe medically.

To amend the situation, hard copies of the declaration form are prepared for old people, individuals without a smartphone or 3G/4G service can finish the procedure. The down side is that this paper is only eligible for one checkpoint, and vehicle users must repeat the action at each checkpoint.

In the evening of August 15, the HCMC Department of Public Security announced a temporary halt of the movement declaration policy inside the city. Accordingly, people passing checkpoints do not need to display a QR code but only necessary regulated documents as cited in Directive 12 by HCMC Party Committee and Directive 16 by the Prime Minister.

Those who cannot show these documents are asked to return to their departure, while those going out without proper reasons are strictly fined.

People entering or exiting HCMC still need to observe the movement declaration policy of the Police Department for Administrative Management of Social Order (C06) under the Ministry of Public Security to gain a QR code.

Major General To Van Hue, C06’s Director, stated that it is true there are congestions at some checkpoints due to long movement declaration time. This is because the policy is rather unpopular to the public

To address the problem, related forces must improve their propaganda campaigns so that traffic users, especially those in marge cities like Hanoi or HCMC, are aware and actively declare their movement at home in advance.

C06 also informed that it has worked with the Ministry of Information and Communications and the Ministry of Health so that declaration apps of these three ministries can use one common QR code as soon as possible.

Senior Lieutenant Colonel To Anh Dung, Deputy Director of C06, said that congestions at checkpoints when examining QR codes are unavoidable if traffic users do not declare before hand at home. It is, therefore, necessary to instruct people so that they are used to this procedure. At that time, the policy can prove its effectiveness in tracking people from infected areas.

Major Nguyen Thanh Lam of PC06 under Hanoi Department of Public Security shared that right now, his unit is cooperating with toll booths, checkpoints at gateways of the city to distribute instruction paper on health and movement declaration procedures to avoid possible congestions and direct contact.