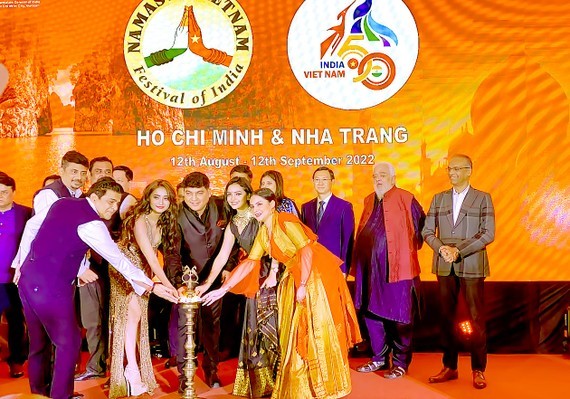 At the opening ceremony
The festival was opened at the Reunification Hall last night, and it will last until August 21.
Speaking at the opening ceremony, Ambassador Extraordinary and Plenipotentiary of India to Vietnam Pranay Verma said that the nine-day event is an opportunity for the two countries to exchange culture and commerce, and a great connection platform to promote bilateral relations in the sectors of tourism, commerce, culture and arts, music and film between India and Vietnam.

Especially, the festival is expected to create cooperation chances for the two countries in the post- Covid-19 pandemic, and to bring more business opportunities in the fields of information technology, education, health, investment, and so on.

Director of Ho Chi Minh City Department of Foreign Affairs Tran Phuoc Anh hoped that the festival would create further connectivity between the two cultures and economies, enhance deeper understanding as well as promote the relationship between Vietnam and India.

There were traditional dancing and singing performances of the two countries with the participation of Vietnamese and Indian artists at the opening ceremony.