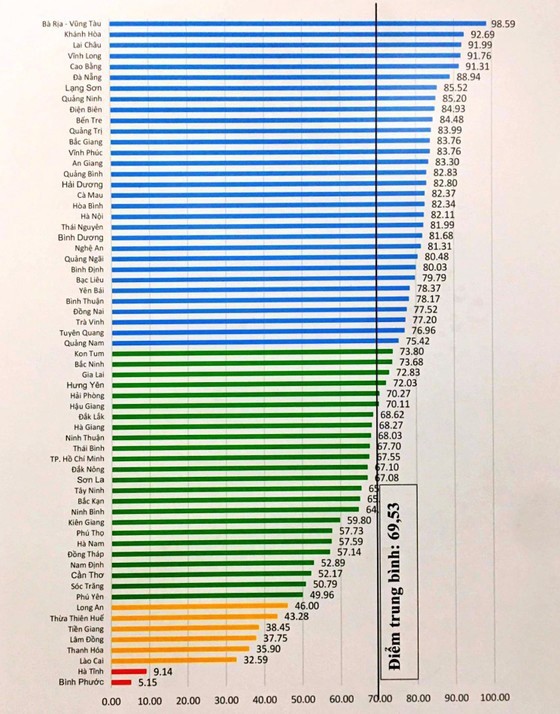 The POBI ranking of 63 provinces and cities across the country. (Photo: SGGP)
The above information was provided in the report at the conference to announce the POBI in 2021 by the Center for Development and Integration (CDI), the Center for Economic and Strategic Studies of Vietnam (VESS), held in Hanoi on September 28.

The results of the POBI 2021 survey showed that the level of budget disclosure of the provinces did not improve significantly compared to POBI 2020. The average ranking score of the provincial budget publicity reached 69.53 out of 100 points, an increase of 0.44 points compared to 2020.

In 2021, 31 provinces fully disclosed documents and information about the state budget, up four provinces compared to 2020. The number of provinces with relatively complete disclosure was 24, and the number of those that disclose incompletely and rarely publicize was six and two, respectively. Ba Ria - Vung Tau was the province topping the POBI 2021 survey ranking, reaching 98.59 points. Khanh Hoa ranked second with 92.69 points, and Lai Chau ranked third with 91.99 points.

The POBI 2021 survey was conducted based on three criteria: budget transparency, citizen participation in the budget cycle, and accountability.