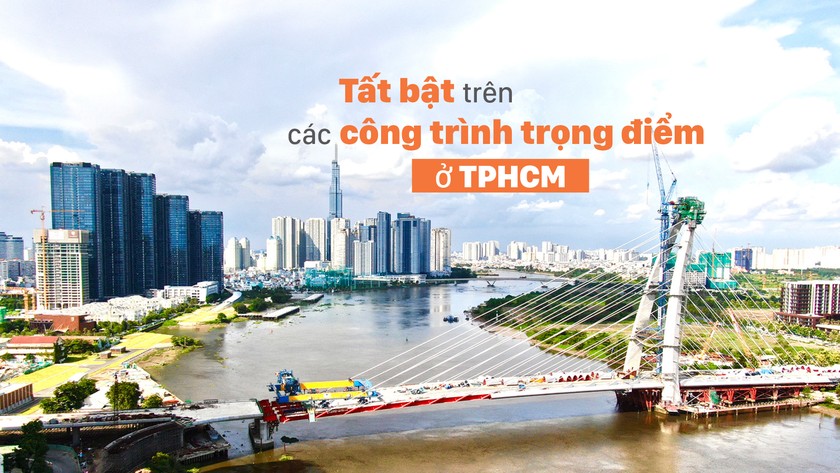 The People’s Committee of HCMC has allowed several urgent and important projects to be continously carried out during social distancing period under strict safety guidelines.

According to the Management Authority for Urban Railway of HCMC (MAUR), around 426 engineers and workers are working on the construction site of the Ben Thanh-Suoi Tien Metro Line No.1, including 139 people implementing the Package 1 (CP1), 231 persons building the Package 2 (CP2) and 46 workers carrying out the Package 3 (CP3) under the modes of "three on spot" and “one route, two destinations” in response to the stricter travel measures on controlling those who are allowed to go out amid the social distancing period.
About 1,400 specialists, engineers, officers and workers of the metro line projects have received at least one dose of a coronavirus vaccine, a representative of MAUR said. 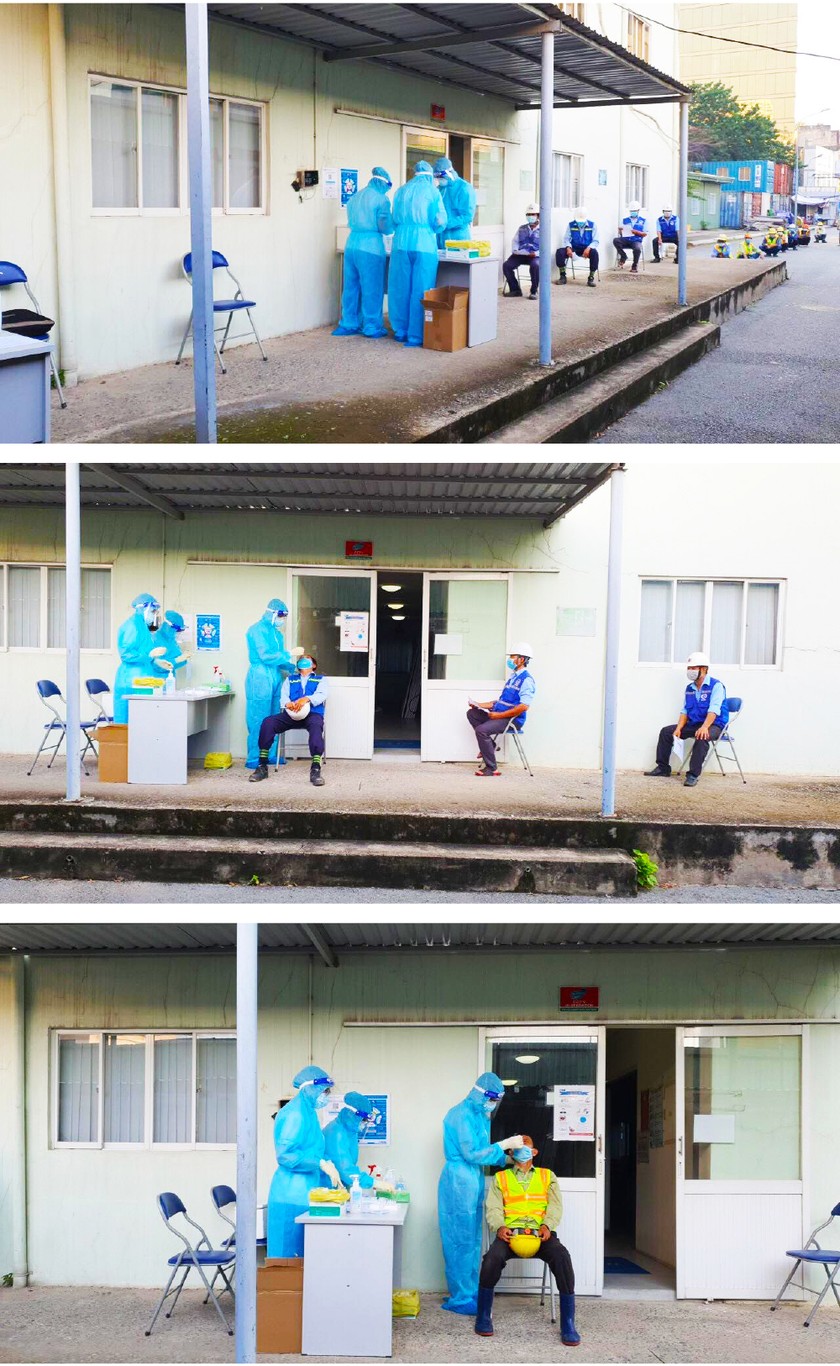 Workers take a rapid test before entering the construction site. 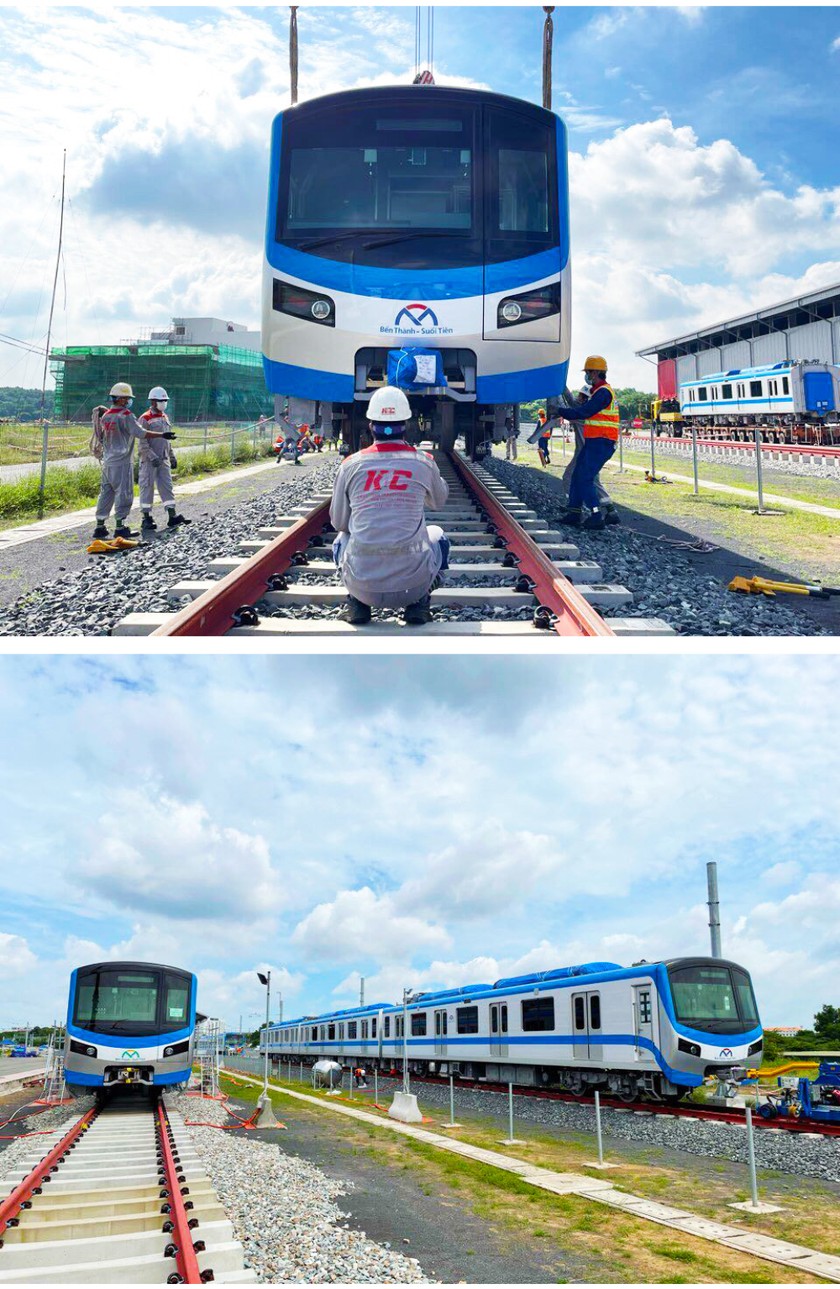 At the worksite of the Ben Thanh-Suoi Tien Metro Line No.1 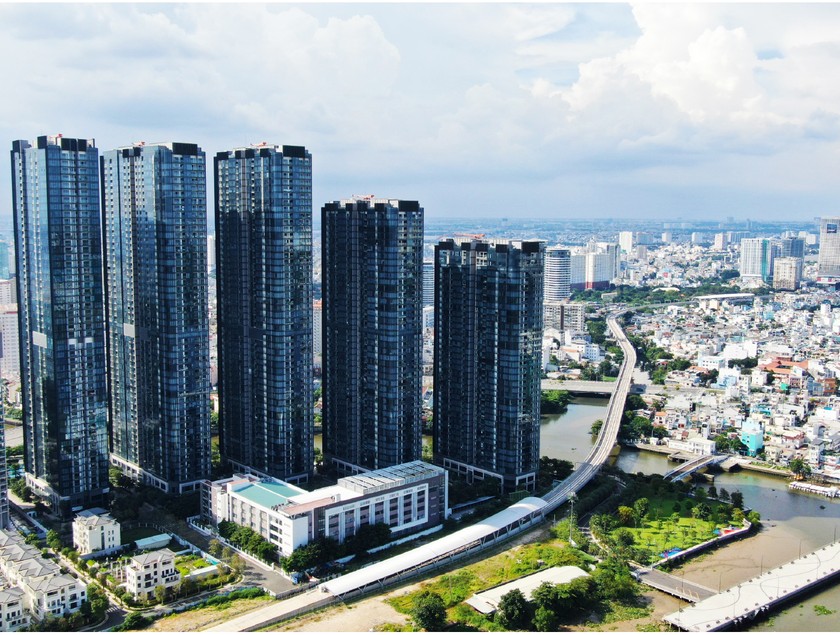 Director of the city Transportation Works Construction Investment Project Management Authority Luong Minh Phuc said that 82 engineers, supervisors and workers are also currently working at the worksites of three major constructions under the mode of “three on spot”.
Regarding to the project of the overpass in front of the new Eastern Bus Station on Hanoi Highway in Thu Duc City, the construction unit has completed the concrete pouring work and paving the path No.3 leading to the overpass and a parallel road.
Meanwhile investors have currently implemented items of tree planting, lighting and paving of the technical infrastructure of nine land plots in the Function 1 in the Thu Thiem new urban area, he added.
At the building site of an intersection with overpasses and tunnels at the Nguyen Van Linh - Nguyen Huu Tho intersection in District 7, more than 30 workers are rushing to carry out the project. They will get tested for coronavirus once a week. The done work volume of the project reaches 52 percent.
In the afternoon of September 1, teams of workers completed the final tasks in a rush before the connection of main spans of Thu Thiem Bridge 2 that was scheduled to take place on September 2. 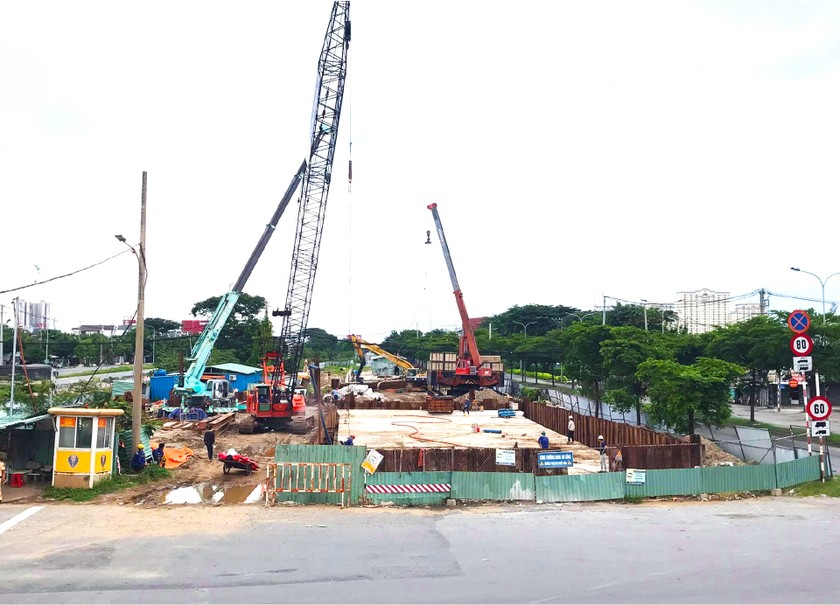 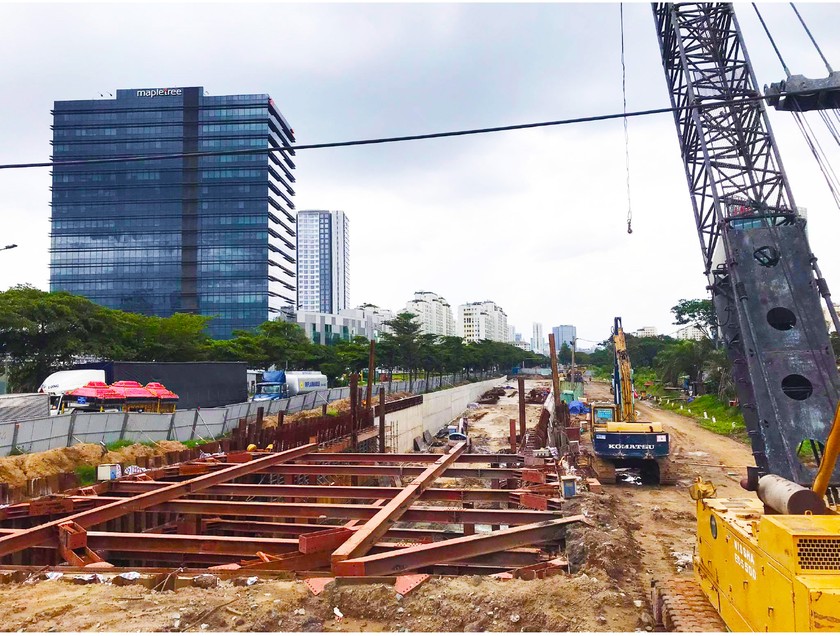 About 120 engineers and workers are working day and night in different shift work schedules on the construction site, complying with the in-place control measure, including eating, resting and staying at the workplace, said the project’s investor Dai Quang Minh Real Estate Investment JSC.
Thu Thiem Bridge 2 over the Saigon River connecting District 1 and Thu Thiem Peninsula in District 2 is a cable-stayed bridge that has six lanes and a total length of 1,465 meters, with the main section stretching 885.7 meters. The main tower is 113m high, towards the Thu Thiem area.
The construction of Thu Thiem 2 Bridge project started in 2015 with total investment capital of VND3, 082 billion ($134.7 million). Currently, the done work volume of the construction project of Thu Thiem Bridge 2 reached more than 80 percent. 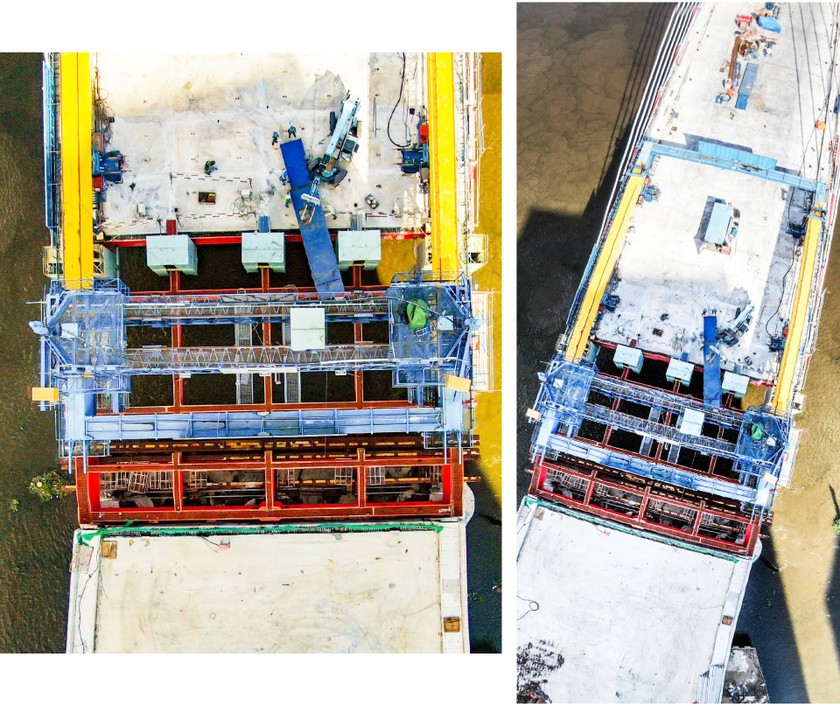 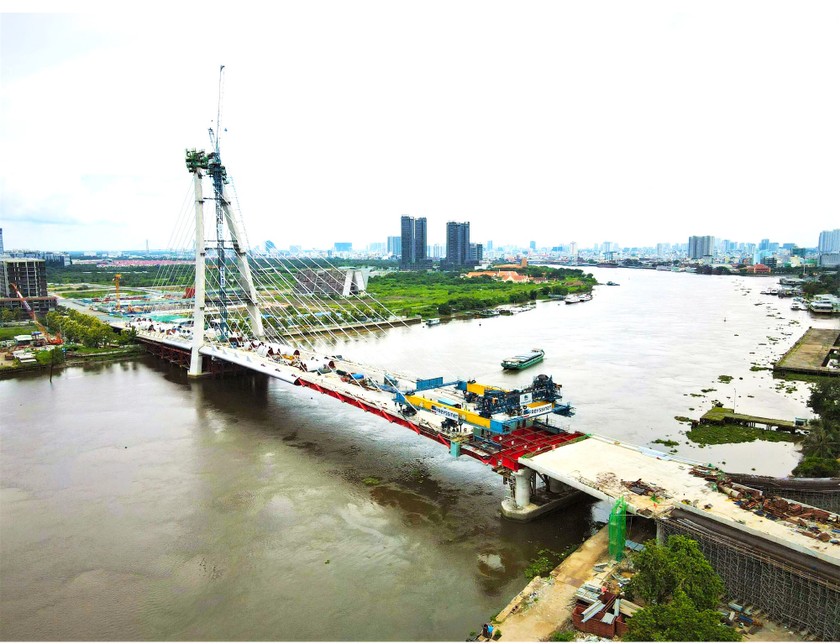 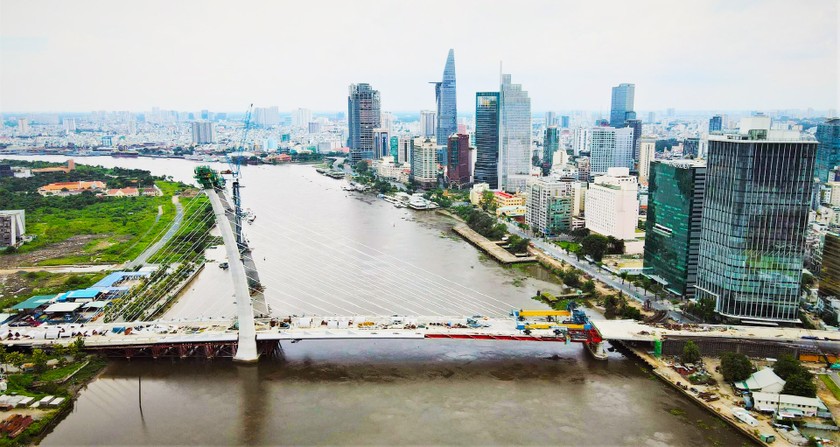