Mr. Khue extended best Tet wishes to Colonel Le Kim Bang, a wounded soldier who was former Deputy Chief of Staff of the 7th Military Region, and expresses his deep gratitude to the solider for his great contribution in war fighting and protecting the nation's independence. The colonel spent 38 years of military service. He participated in wars in Laos’ Xiangkhouang Province, Quang Tri Province, the historic Ho Chi Minh Campaign and international mission in Cambodia.

He expresses his deep gratitude to the solider for his great contribution in war fighting and protecting the nation's independence.
On the same day, city’s leaders also visited wounded soldier Vo Thi Tam in Go Vap District. The female soldier served in the army in many years and was one of the political prisoners of Con Dao prison. Ms. Tam was granted the title of "Hero of the People's Armed Forces" in 2011.
The head of the Propaganda Department of the City Party Committee highly appreciated the local authorities of the Ward 17 in Go Vap District that provided needed support to the Ms. Dao Thi Minh Hieu’s household during the stay-at-home instruction as a result of COVID-19. He wished her family good health, happiness and success in improving living condition in the coming days. 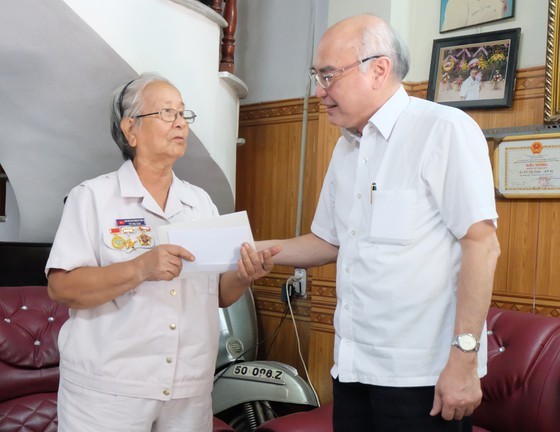