Along with the metro line, step-by-step formed buildings and projects are expected to create a turning point in term of economy for the city.

Over a decade dream

After the great efforts of relevant units, on October 8, 2020, the first metro cars of the Ben Thanh – Suoi Tien metro line officially were shipped to Ho Chi Minh City and transported to Long Binh Depot in Thu Duc City in the evening of the same day.

From now, the production, checking and importing of the remaining wagons are being accelerated in accordance with the project progress.

Mr. Huynh Thanh Tri, a resident living near Thu Duc Intersection shared that after many years waiting for the metro line, he is proud of the city’s public transport system which is considered to be as modern as many developed countries in the world. He hoped to be one of the first passengers to experience the first metro line.

Mr. Nguyen Minh Thanh, whose house is near Hanoi Highway shared that the project has been step-by-step formed after ten years of difficulties and challenges. As a city resident, he is very proud of the city’s iconic project which would be a chance for the city’s economic and tourism development. He also expected that the first metro line would be a “springboard” to build other metro lines, develop public transport system to reduce the traffic jam.

Heading towards the smart city

The synchronized transport infrastructures, in which the metro lines are an indispensable part, are among the core elements to build the smart-city to meet the operational needs of the world's megacities and Ho Chi Minh City is not out of this criteria. As this reason, the local people and city government are day-by-day awaiting for the first metro line to be officially put into operation.

The Ho Chi Minh City Urban Railway Management Board (MAUR) has set a target of putting the first metro line into exploitation by the end of 2021. Meanwhile, relevant sides are striving to complete site clearance and compensation to start work on the second metro line of Ben Thanh – Tham Luong in 2021. 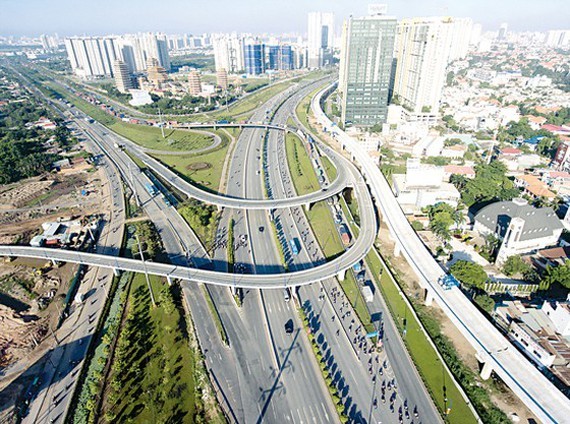 According to Head of the Ho Chi Minh City Urban Railway Management Board Bui Xuan Cuong, big buildings to be under construction with the aim of developing the city center will become a symbol of exciting life rhythm in HCMC.
The underground department store Ben Thanh under Quach Thi Trang Square and along Le Loi Street, District 1 is expected to be completed in accordance with metro line No.1, connecting to the surrounding urban areas such as streets of Le Loi, Ham Nghi, Dong Khoi, Nguyen Hue and surrounding buildings. It is expected to international trade chains promoting the service quality in the downtown area.

In parallel, the Thu Thiem 2 Bridge Project with a design of 1.4- kilometer length and six lanes is about to be built which is considered to be the special project of the city connecting District 1 with Thu Duc City.

With art lighting design, the project is not only an iconic architecture in Saigon River by night but also a welcome symbol from the city’s center to Thu Thiem new urban area.

According to Mr. Bui Xuan Cuong, these key projects will bring a new image to the city’s center.

The transformation makes the heart of Ho Chi Minh City more pedestrian-friendly, creating a better link between commercial buildings, services and cultural heritage buildings, better connecting with Thu Thiem new urban area on the other side of the Saigon River, contributing to creating strong momentum to the East of Ho Chi Minh City.

Besides that, it is expected to be a “springboard” to promote economic development in general, improve transport infrastructure in particular, contributing to helping Ho Chi Minh City develop rapidly in the near future.