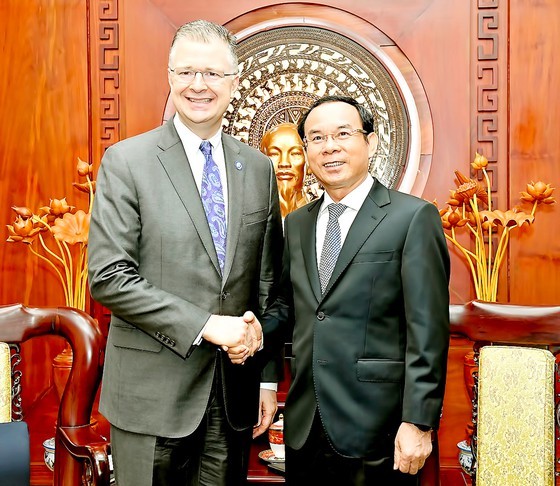 He affirmed that he would try his best to contribute to the relations two nations in general, between the US and HCMC in particular.
Mr. Nen congratulated Kritenbrink on his appointment as Assistant Secretary of State for East Asian and Pacific Affairs and hoped the outgoing US Ambassador to continue to promote the Vietnam-US comprehensive strategic partnership and the cooperation ties between HCMC and the US.
He said that Mr. Daniel J.Kritenbrink has left a deep impression on Vietnamese people that he has become the first ever U.S. ambassador to Vietnam to visit the Truong Son Cemetery and HCMC Martyrs Cemetery, and his video of a Rap song to cheer up Vietnamese people on the occasion of Tet festival.
The city’s leader said that HCMC is always ready to cooperate with the next U.S. Ambassador to Vietnam and U.S. Consul General in HCMC to support the further Vietnam-US comprehensive strategic partnership and contribute to the peace, security and development in the Pacific and Indian Oceans.
For his part, outgoing US Ambassador to Vietnam Daniel J.Kritenbrink expressed his thanks for the support of Vietnamese leaders and people in helping him complete his missions during the tenure, especially the help of the HCMC’s government in the establishment of the Fulbright University and creating advantages for the US businesses’ operation and investment in the city.
He also congratulated Vietnam that is one of the growing economies during the Covid-19 outbreak for its achievements in the fight against the pandemic.