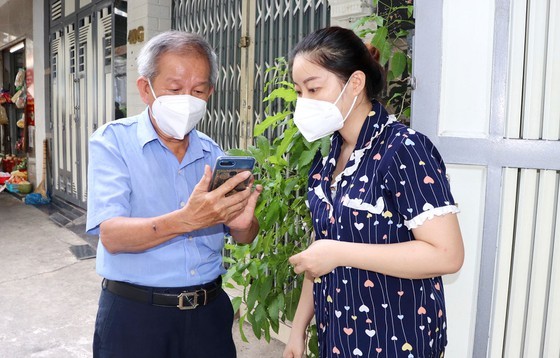 Nguyen Vinh Ngoc, leader of Neighborhood 23 in Ward 4 of District 4, is answering questions of a neighborhood member regarding the eligible list to obtain financial support in the third round. (Photo: SGGP)

Residents in Neighborhood No.23 of Ward 4 in District 4 have all received the list of 624 eligible people to obtain financial support in the third round via their Zalo group and can easily check related information. Whoever not in the list have been explained the reason why they are not there.

“My family has 5 members. My son is still working with a stable salary, so his name is not in the list, but the other four are. In my opinion, this time all information is clear and easy to track, which is very transparent”, said Tran Thi Ngoc Thanh from Neighborhood No.23.

Leader of this neighborhood Nguyen Vinh Ngoc commented that thanks to detailed and logical explanation of why certain people are or are not in the list, along with instruction on how to monitor this support delivery process, all residents have their mind at ease.

Ward 4 of District 4 has finished reviewing the eligible list of over 14,000 people out of 16,000 nominated ones by September 26, and corresponding names have been sent to all neighborhoods in the ward for public announcement. Mostly via local Zalo groups. Residents then can submit feedback on incorrect information to adjust.

Similarly, in Nha Be District, the list of about 170,000 eligible people to receive financial support in this third round has been examined. Meanwhile, Cu Chi District is in its final stage of the reviewing process for more than 453,800 residents. District 11 is ready with the list of 160,000 people to obtain support this time and can begin the delivery task at any moment. 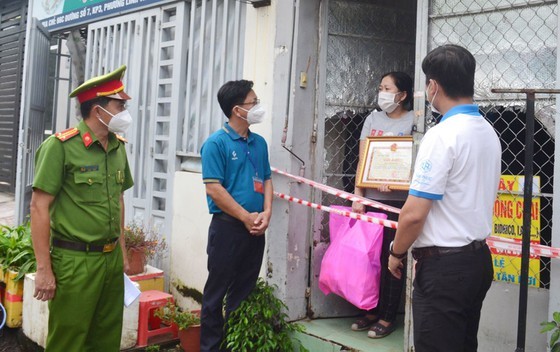 Chairman of Linh Trung Ward People’s Committee reported that there are about 52,000 people entitle to receiving support in his area this time. However, 1,625 of them are willing to gift their portions to poorer ones.

Also in District 8, functional agencies have compiled a shortlist of around 394,400 eligible people from the preliminary list of over 433,000 citizens. In this list, nearly 33,000 people are temporary residents living in boarding houses, most of whom are manual workers and students.

It is planned that in this third round, HCMC will deliver support worth VND7,347 billion (approx. US$323 million) to over 7.3 million people being severely affected by Covid-19, regardless of their residence status. Each will receive VND1 million ($44) in cash or through bank transfer.

QTSC is assigned by HCMC People’s Committee to check the submitted lists with the one sent by HCMC Social Insurance Office and eliminate from the list cases of people currently receiving pension or financial support for work capacity loss, and those participating in social insurance still having salary this August.

All localities have basically finished compiling their lists and are now cooperating with QTSC to review and adjust information, if any, before the support delivery stage, scheduled to happen from October 1-15. During that time, the lists will still be updated and added into when necessary.

During this preparation stage, District 7 has organized a training session for 450 officials to familiarize themselves with the app SafeID Delivery to serve the upcoming support distribution stage. Meanwhile, the Command Center for Covid-19 Prevention and Economy Recovery is in operation, with the integrated database on eligible people receiving financial support for better monitoring tasks.

Director Le Minh Tan informed that any localities whose list is carefully checked can begin the support distribution stage before October 1. To endure the transparency of this process, the lists must be publicly posted at the People’s Committee of each ward and the bulletin board, whether online or offline, of each neighborhood. State leaders in all districts and Thu Duc City must use their given accounts to outlook the progress of this distribution.