Implementing the city’s breakthrough action program to reduce traffic congestion and traffic accidents in the areas nearby Tan Son Nhat Airport in the period of 2016-2020, Ho Chi Minh City has invested in the construction of bridges and roads such as the flyovers in Truong Son Street and at the intersection of Nguyen Kiem - Nguyen Oanh - Pham Van Dong - Nguyen Thai Son which have basically solved traffic congestion in the areas. 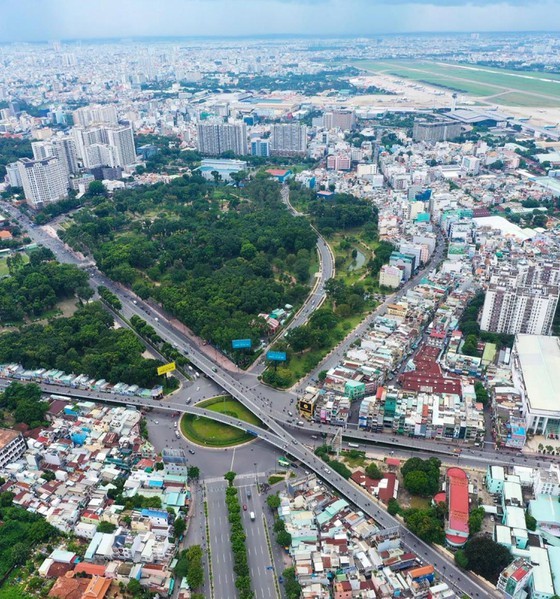 Besides, the city planned to carry out more projects, including a road connecting Tran Quoc Hoan Street with Cong Hoa Street in Tan Binh District in accordance with the adjusted construction planning of Tan Son Nhat International Airport approved by the Ministry of Transport with a total investment of over VND4,800 billion (US$212 million). This is one of the most important projects connecting to Tan Son Nhat Airport, considered as the second gateway to the airport next to Truong Son Street.
Of which, five upgraded, expanded and renovated projects for Hoang Hoa Tham, Cong Hoa, Truong Chinh Street in Tan Binh District, Tan Ky Tan Quy Street in Tan Phu District and Tan Son Street in Go Vap District around Tan Son Nhat Airport have been approved but the clearance of the site has affected their implementation progress.

To speed up the implementation process of the traffic projects synchronized with the T3 terminal project of Tan Son Nhat International Airport, the People's Committee of Ho Chi Minh City has proposed the Ministry of National Defense promptly hand over about 1,122 square meters of land outside the boundary of the road project, connecting Tran Quoc Hoan Street with Cong Hoa Street in Tan Binh District, for HCMC to conveniently regulate the traffic and perform on-site resettlement for the affected households.

According to Director of the Transportation Works Construction Investment Project Management Authority of HCMC Luong Minh Phuc, to synchronize with the construction progress of the T3 passenger terminal, the work must be started this year and be completed by the end of 2023.


The road connecting Tran Quoc Hoan Street with Cong Hoa Street in Tan Binh District is a major traffic project of HCMC in the period of 2020-2023.  It is designed with over four meters in length, 29.5 meters to 32 meters in width, six lanes for vehicles; running through tunnels at Phan Thuc Duyet- Tran Quoc Hoan intersection, Truong Chinh-Tan Ky Tan Quy intersection and the overpass in front of T3 terminal.

The T3 Terminal Construction Project of Tan Son Nhat International Airport has a designed capacity of 20 million passengers a year, a total investment of about VND10,990 billion (US$485 million) from the capital of Airports Corporation of Vietnam (ACV).

Currently, the bidding, design and technical procedures are ready to start. The project is expected to start construction in October.