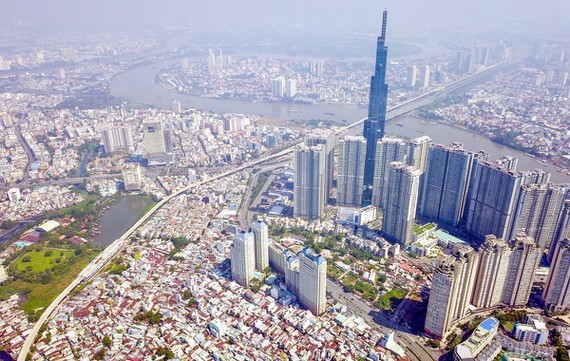 A corner of HCMC (Photo: SGGP)
Regarding a planning scheme of Thu Duc City by 2040 with a vision to 2060, the municipal authorities have asked Thu Duc City to set up a detailed plan of the project’s planning process simultaneously with the building of the overall urban planning scheme.

The reports of a series of urban planning projects, including an overall urban planning scheme by 2040 and a planning scheme of Thu Duc City must be sent to the HCMC People’s Committee before July 15, the standing board of the HCMC Party Committee before August 15 and the Ministry of Construction before October 15.
According to the overall urban planning scheme by 2040 with a vision to 2060, HCMC will be developed into a city of innovation, creativity, and dynamic development; a pioneer in the large metropolitan region; a center of intellectual and international trade in the country; a service center in the Asia-Pacific region; a city with the highest quality of life and attractive working environment, diversified culture, heritage conservation and scenic river system, a sustainable urban infrastructure and climate change adaptation by 2060.
While Thu Duc City will be established as the first class city and developed into the highly interactive and innovative urban area, serving as a driving force for the implementation of the 4th Industrial Revolution of HCMC. The smart city’s infrastructure is composed of four functional layers, including nature, construction, digital technology and smart service.