The municipal Department of Construction has recently provided the public with detail information about the progress of several key projects in the city as of late July.

Nearly 90% of the work of the Ben Thanh-Suoi Tien metro line have been completed, it said, adding contractors are also striving to complete construction at the end of 2023, or the beginning of 2024. 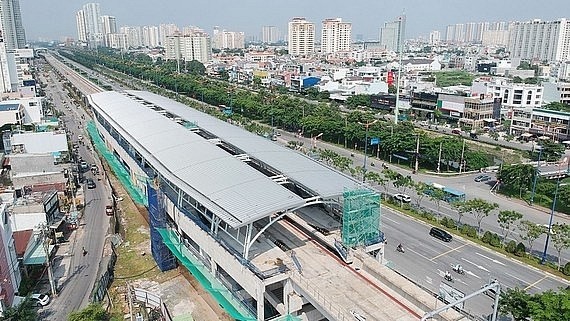 Metro Line No. 1, nearly 20km long, has a total investment of over VND43.7 trillion (US$1.9 billion) and consists of three underground stations and 11 over-ground platforms. It was initially scheduled for completion in late 2021 to run commercially in 2022, but then delays hit due to the pandemic and procedure-related problems.

Meanwhile, Metro Line No.2, connecting Ben Thanh with Tham Luong, is still in the site clearance stage, as the official development assistance (ODA) capital for it has yet to be extended.

In July, Ho Chi Minh City established a council of the Belt Road No.3 project, which will help ensure the construction on the project will begin in June 2023.

The belt road has a total investment of VND75.3 trillion, running through the city, and Binh Duong, Dong Nai and Long An provinces.