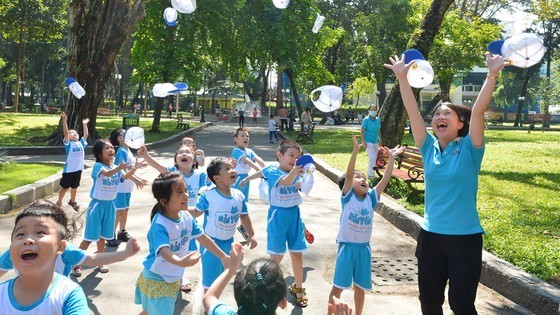 Children playing at Tao Dan Park (Photo: SGGP)
According to city officials, at least 150 hectares of parkland and 10 hectares of public green space were to be added to the urban planning for 2020-2025, with the aim to reach 1 square meter of green space per person in 2030.

In reality, however, green areas in the city are being encroached upon and existing public parks exploited for wrong purposes.
For example, the front of Le Thi Rieng Culture Park in District 10, one of the city’s largest public parks and home to several historic monuments, has been rented out to storefront owners and used as a parking space by park management.

The same can be said about Gia Phu Park in Tan Phu district, one of the few leafy public spaces in the area. “I really enjoy strolling in the park, but now I rarely set foot in there since every inch of solid pavement is taken up by small vendors with their makeshift stalls”, said a local elderly citizen.
Furthermore, park managers have also allowed the tiling of large stretches in the park to justify multiple forms of public entertainment and utilities. The most notable example of this is Van Lang Park in District 5, where decade-old trees are dying off as a result of limited soil areas.

Parts of Le Thi Rieng Culture Park being used as a parking lot (Photo: SGGP)
According to statistics, there are currently 510 hectares of green space out of the 11,400 hectares reserved for public parks in HCMC, which does not meet the standards set by the Ministry of Construction that requires over 7 square meters of green space per person for HCMC specifically.

Out of this 510 hectares, only a few parks are managed by government agencies while the rest, especially large recreational hubs like Suoi Tien and Dam Sen theme parks and the Saigon Zoo and Botanical Garden, are run by private entities, leading to the misuse of green space.
More alarmingly, green spaces only take up 49.41 percent of the rapidly growing Thu Duc City and suburban districts with no prominent public park.
Urban planning experts have suggested that the city look into building new public parks with non-government resources to better control and evenly distribute green spaces in HCMC.