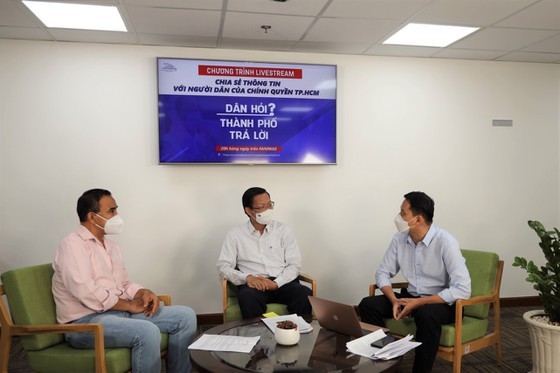 At the beginning of the session, Chairman Phan Van Mai mentioned the determination of the municipal authorities to both fight against the pandemic and take good care of all residents in HCMC, while developing a suitable logical plan for economic recovery after the outbreak is put under control.

When being asked about the exact time to ease social distancing rules in the city, Chairman Mai first admitted that there are still several challenges to citizens, especially in the shelter-in-place time. However, because of the danger of this Delta variant, along with the loose regulation observance in certain places in the city, the result so far has not been as expected.

“The good news is when applying the shelter-in-place rules and performing quick Covid-19 tests citywide to detect F0 cases in the community, the situation has become better, meaning that with better care for F0s to minimize death, a wider vaccine coverage, and stricter, more synchronous regulation observation among citizens, the outbreak can be put under control”, said the Chairman.

He then mentioned the Government’s resolution for HCMC to manage this outbreak before September 15, and the city is doing its best to achieve that goal. This will become the foundation for the municipal authorities to consider a detailed route to ease social distancing rules afterwards.

However, Chairman Mai insisted that regulation easing only happens as far as medical safety allows. So until September 15, the city basically maintains the rules having been introduced since August 23.

Nevertheless, there are two adjustments: supermarkets and supply chains now serve people within their sited ward or commune. In red zones, shippers will help residents to shop for groceries while people in the green zones, preferable with those being fully vaccinated, are allow to do this by themselves once a week.

The Chairman also informed that right now HCMC has no plan to reopen traditional markets yet, but the two major wholesale ones, namely Binh Dien and Hoc Mon, are approved to resume their operation to better deliver foodstuff to citizens in the city. Besides, when the outbreak is under control to a certain extent, the city will gradually greenlight other industries and locations to restart their work.

Being fully vaccinated with 2 doses is one key safety condition, along with the 5K rules, to help people come back to their normal life. However, Chairman Mai stressed that fully vaccination does not mean a total safety against the disease or the only condition for people to freely do what they want.

Foodstuff coming to HCMC from all regions in the country

Discussing the social security matter, the Chairman apologized to anyone being missed out in the previous support rounds and admitted that social security packages of HCMC have not met such a high demand from the community yet, resulting from insufficient research of the city and inconsistent implementation of the localities.

Luckily, there are always benefactors willing to offer support to their poorer neighbors, which is highly appreciated.

He reported that the city has spent over VND6,000 billion (approx. US$264 million) from the city budget and social resources for social security reasons. Over 1.6 million social security packages have been delivered to needy people.

In the following months, the city will provide financial help to individuals in need, together with 15kg of rice per person per month. More social security packages will be prepared, and landlords are encouraged to reduce room rent fee for their poor tenants. Any vulnerable cases missed out in the previous support rounds will be added to the list to receive help without the need to provide any proof documents.

Finally, talking about the help of the municipal authorities to small and middle-scaled businesses in HCMC when economic activities are allowed to resume, Chairman Mai shared that the city has proposed to the State Bank to offer support packages like debt freezing or rescheduling, loan interest rate reduction. In addition, the city is planning to launch an interest rate support program, restart its funds to partially help businesses in need of capital. Simultaneously, aiding policies for utility bills and land lease costs are to be initiated.

The city welcomes all suggestions from business associations to perfect related policies and introduce by September 15.