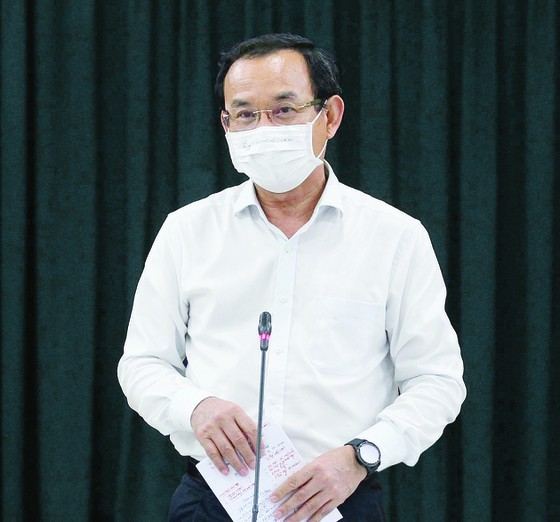 He supported the planning direction of the district to decrease the density, increase vertical constructions which combine accommodation and service purposes, and save more land for public sites in order to form a clean, green, civil, and smart urban area. He also agreed with the district’s economic development plan to foster high-quality services like finance and credit, premium office and housing renting, tourism, as well as eco-friendly hi-tech manufacturing.

Commenting on the significantly fast population growth, urbanization rate of Go Vap District, Secretary Nen praised on the district’s ability to ensure social security for its residents, especially the establishment of nearly 45,000m2 of green space and 186 eco-friendly constructions in several neighborhoods.

He then asked that the localities keep on its excellent work of maintaining the urban security and promote green space growth so that the district becomes cleaner, greener, more beautiful, and safer.

Discussing the current security status in Binh Thanh District, the Party Chief said that since this district has a dense population coming from various provinces, the localities must pay more attention in monitoring the urban security, traffic status, crime rate and social problems.

To all three districts, Secretary Nen reminded them to focus more on promoting the campaign ‘All Citizens Protect the National Security’ in order to effectively reduce crime rates and social problems while preventing fires in neighborhoods, particularly in narrow alleys. At the same time, district leaders should wisely use the Fund for Public Security Protection to reward any resident or organization with impressive achievement in maintaining the safety of the local area.

The poverty alleviation work is also well done, and now there is literarily no extremely poor household in the district. Besides, the ‘Social Fund’ raised by citizens here contributes greatly to support the vulnerable in the district.

Highly appreciating the land donation of Phu Nhuan District’s residents, Secretary Nen hoped this action could be copied in other areas of HCMC.

Regarding the not too effective administrative reform tasks in the three crowded districts, the HCMC Party Chief urged that the localities prioritize the establishment of a digital local government and smart urban management so that public administrative services could be done online to answer the urgent needs of individuals and businesses located here.

Along with that is the recommendation to upgrade the level of state officers in order to form the responsible, devoted, collaborative, democratic staff that are able to help citizens in need just like the instruction of President Ho Chi Minh.

In addition, the Party Committee of each district should regularly take care of the Party building task, while the monitoring job of the local Fatherland Front and other socio-politic organizations should be upheld when carrying out district-leveled projects and plans now that there is no more district and ward People’s Council.

Lastly, Secretary Nen highly appreciated the determination and effort of all districts in fulfilling the dual target of economic growth and pandemic prevention. In particular, he praised Binh Thanh District on its timely forming of over 1,500 Covid-19 response team in all neighborhoods to actively track any possible virus carrier in the community.

He stressed on the importance of disease prevention for the upcoming national election so that all voters are ensured medical safety when performing their voting duty. Any violation of Covid-19 prevention rule must be strictly punished.