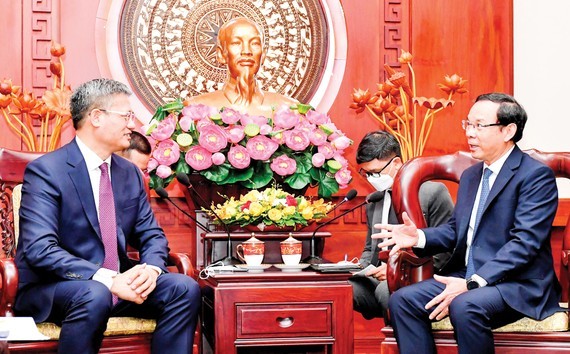 At the reception, the city Party chief congratulated the Chinese Consul General to Ho Chi Minh City Wei Huaxiang during his working tenure in the city; and highly appreciated the great achievements that the Party, Government and Chinese people had gained over 40 years of reform and opening-up and affirmed that the relationship between Vietnam and China has tended to positively develop.
Senior leaders of the two Parties, countries have maintained exchanges under different flexible forms to strengthen the political trust, and widen practical cooperation in various fields. The bilateral trade turnover growth in 2021 between the two nations reached nearly US$170 billion, an increase of nearly 25 percent over 2020. In the first five months of the year, the bilateral trade turnover gained nearly US$73 billion.

Currently, China ranks 18th out of 116 countries, territories having investment in the city with a total investment of nearly US$240 million. In 2021, the total export turnover between HCMC and China gained around US$28 billion.

Chinese Consul General to Ho Chi Minh City Wei Huaxiang expressed his thankfulness that the city leaders have extended to him along with prompt support for his working tenure in the city. Mr. Wei Huaxiang proposed cooperation programs between HCMC and China’s localities in terms of logistics, smart city, digital economy, health, infrastructure and social housing projects along with promoting people-to-people communications to deepen the comprehensive strategic cooperation between the two countries.