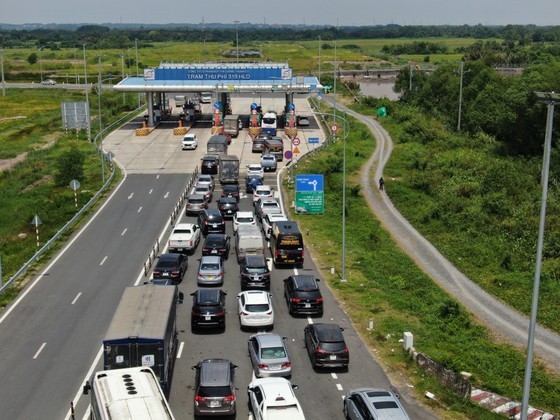 Sub-project 1A is sited in both HCMC and Dong Nai Province. It is one part of Ring Road No.3 of HCMC, approved by the Transport Ministry in 2016 and amended for the last time this June. This 8-kilometer part begins at the intersection with Provincial Road No. 25B in Nhon Trach District of Dong Nai Province and ends at the intersection with HCMC-Long Thanh-Dau Giay Expressway in Thu Duc City of HCMC.

The road follows the level-3 plain road model for the maximum speed of 80kph. Its width is 20.5-26m and has 4 lanes of motor vehicles plus 2 lanes for mixed traffic.

The total investment in this sub-project is nearly VND7 trillion (US$295 million), including the loan amount of $190.77 million from the Government of the Republic of Korea via the Economic Development Co-operation Fund (EDCF).

In this sub-project, Nhon Trach Bridge is the most anticipated item. It is 2.6km long and 19.5m wide to connect Dong Nai Province and HCMC, with the total investment of over VND1.81 trillion ($76.5 million). This is one of the two main bidding packages of the sub-project, the other being the leading ways at two ends of the bridge with a total length of 5.6km.

It is expected that the bridge is built in 35 months, and the leading ways 30 months, starting as soon as the People’s Committees of HCMC and Dong Nai Province finish land retrieval. The chosen contractor is Kumho Engineering & Construction.

So far, over 2.8km of land has been given to the sub-project, 1.7 kilometer of which from HCMC (91 percent of the goal) and nearly 2 kilometer from Dong Nai Province. The land needed for Nhon Trach Bridge is basically retrieved, and Dong Nai Province is requested to accelerate the land compensation and resettlement process to have the land neighboring Dong Nai River ready for construction.

Dong Nai Province People’s Committee has asked its Department of Natural Resources and Environment to cooperate with related units to devise reasonable compensation prices for approval this October.

The news of the to-be Nhon Trach Bridge has been wholeheartedly welcomed by laborers working in Saigon Hi-tech Park of Thu Duc City, as they would soon travel conveniently between HCMC and Dong Nai Province.

People who wish to buy a house in neighboring areas of HCMC can now start their plan thanks to easier traffic. This, to some extent, can solve the problem of limited land resource for housing and too unapproachable land prices in HCMC, particularly in Thu Duc City, whose population is expected to increase to 1.5 million by 2030.

Nhon Trach Bridge, when completed, allows the expansion of population from HCMC to Dong Nai Province, which in a long term helps Thu Duc City to grow more sustainably.

In addition, according to the general construction planning and the zone planning of HCMC, in the next 10 years, Nhon Trach new urban area with its thousands of hectares is considered as level-2 urban area of Dong Nai Province as well as one of HCMC’s satellite urban areas to support the scientific-technological urban area (hi-tech park) of HCMC.

There have been nearly 100 approved large-scale projects on a surface area of around 5,000ha. Sadly, after many years, the land here has been mostly divided into lots to sell, but not many people wish to choose this place as their home, which is a pitiful waste.

The construction of Nhon Trach Bridge is expected to positively change that matter and attract more people to Nhon Trach new urban area.