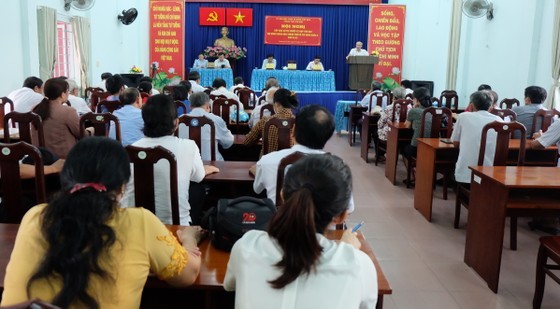 The meeting between the second unit of HCMC People’s Council and voters (Photo: SGGP)

Representing the second unit, Head of the Propaganda and Education Board of the City Party Committee Phan Nguyen Nhu Khue confirmed that the unit will collect all opinions of participants to report to HCMC People’s Council for consideration and response. He also asked that state leaders in Thu Duc City increase discussion with residents to welcome more practical proposals, urgent concerns of citizens for timely explanation and proper feedback.

Hearing the information that certain residents have lived for 20 years in temporary accommodation, delegate Khue requested Thu Duc City immediately address the issue, avoiding the case of having such a strongly developed hi-tech park but letting people live unstably.

As to other projects behind the schedule in Thu Duc City, he asked that Thu Duc City quickly review and introduce suitable road maps to address, beginning with urgent projects receiving complaints from the public for many years. It is advisable that any part of the projects unable to reach a consensus with related partners, citizens should be adjusted or eliminated to resume the work.

Vice Chairman of Thu Duc City People’s Committee Nguyen Bach Hoang Phung informed that until now, the city has disbursed 17 percent of the public investment, mostly on land clearance compensation. He expressed his hope that residents cooperate with the localities to finish the land clearance task for incomplete projects to improve the overall infrastructure of the city.

As to public land resource, he stated that Thu Duc City People’s Committee is reviewing current cases to retrieve land from expired or unfeasible projects. These land lots are planned for public facilities to serve citizens or auctions to earn money for infrastructure investment in the city.