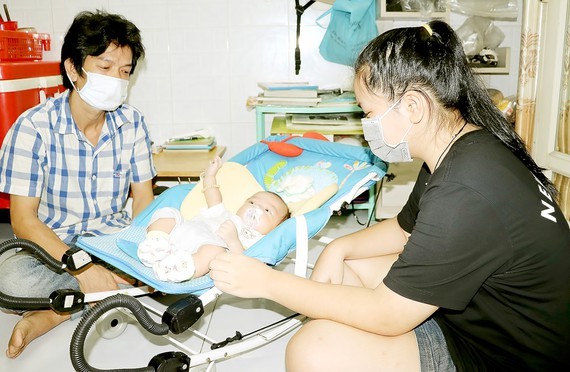 One rainy afternoon in mid-September, in alley 184 Ton Dan Street in HCMC’s District 4, all houses in the alley closed the doors. In the small house, 14-year-old Bang and 13-year-old Chuong were bewildered-looking after their parents died from Covid-19. The house is empty now as their two younger brothers were sent to relatives who will take care of them.
A neighbor said that the father of the boys caught the illness in mid-July and passed away on July 23. His wife also died of the disease one week later. Indeed, the two boys were infected by Covid-19 yet they recovered.
The parents were leaving their four children orphaned. Their six-member family is devastated. The younger brothers of Bang and Chuong are too young to understand; so they cried often asking to meet their parents. Bang and Chuong have taken turns to tidy up the house and cook, wash clothes and dishes. They have taken comfort from the support of people around them. The school sent textbooks and books to them while neighbors have given them gifts.
Elsewhere in HCMC, in a house in an alley at 687 Lac Long Quan Street in Tan Binh District, ninth-grader Nguyen Phuong Quynh Nhu takes her two-month-old brother in her arms comforting him. The girl also burst into tears while comforting the brother as she remembered the scene of the happy family with a new baby two months ago. The girl’s father is a poor unemployed freelance worker for months; as a result, his brother dropped out of vocational school because the family can’t afford his tuition fee.
When a child loses a parent or caregiver, they are not just affected emotionally but also lose financial support and become at greater risk of dropping out of school, developing anxiety, depression. To support these hidden victims of the pandemic, the Ministry of Labor, Invalids and Social Affairs has issued decision No. 1013 on the support of children of Covid-19 mothers and orphans whose parents died of Covid-19. Newborn babies of Covid-19 mothers and orphans are entitled to receive VND1 million and VND2 million respectively. 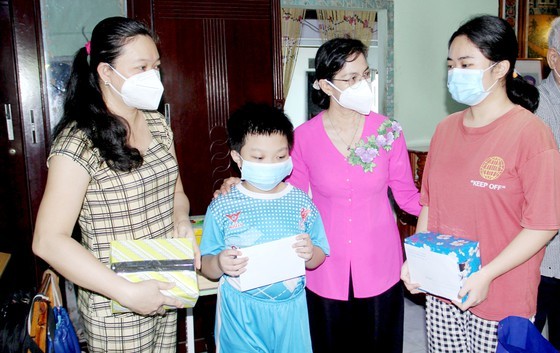 Local administrators give gifts to orphans (Photo: SGGP)
According to the District 4 Department of Labor, Invalids and Social Affairs’ statistics, the district currently has 233 children who have lost a parent in the pandemic need urgent government support. Fifty-two of them have lost their father, mother, or both parents. In addition to the policies for them, the Women's Union and the Youth Union in District 4 called on sponsors to provide scholarships and textbooks, until the end of high school. At this time, local administrations called for food, gifts, cakes and milk for the children during strict social distancing mandates.
Deputy Secretary of Tan Binh District's Youth Union Nguyen Thuan An said that the district currently has 15 children whose father, mother and caregivers died of Covid-19. In addition to gifts, three of them have been given financial assistance until they graduate from high school while the rest are waiting for a sponsor. In addition, another two children received scholarships worth VND5 million each.
Particularly, the District Women's Union awarded ninth-grader Nguyen Phuong Quynh Nhu a scholarship worth VND1.5 million and milk and diapers for her brother. Local administrators also encouraged the children so that they can finish their high school program, said Mr. Nguyen Thuan An.
Organizations, unions and local governments in districts and Thu Duc City have been quick to give financial assistance to orphans. More than 400 scholarships worth approximately VND6 billion and textbooks, computers for online learning have been sponsored by 150 philanthropists since August 10.
Some 106 children have been left orphaned after their parents die of Covid-19 in outlying district Binh Chanh, said district Party Committee's Secretary Tran Van Nam. The district Fatherland Front Committee has launched an appeal for the sponsor of orphans. Benefactors have so far agreed to sponsor twelve children. The party secretary said no children will be left behind.
In addition to the care of the government, many organizations and benefactors also pay special attention to the children. Typically, Chairman of FPT's Board of Directors Truong Gia Binh has just decided that the company will open a school to raise 1,000 children who have lost their parents due to the Covid-19 epidemic. FPT commits to training them for the next 20 years.