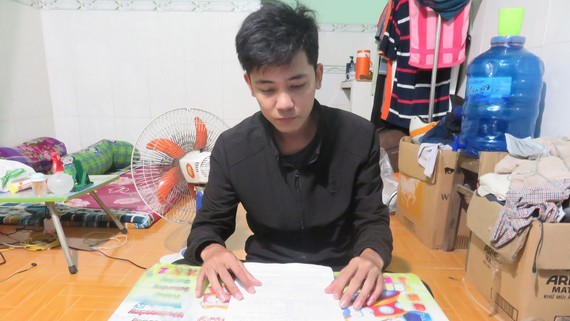 employee Le Van Nhi of Coats Phong Phu Company
A few days ago, employee Le Van Nhi of Coats Phong Phu Company who is living in a rented house at 40/19A in Street No.176 in Phuoc Long A Ward in Thu Duc City) was informed that he was eligible for accommodation rent support. Mr. Nhi said that the form is made by the company and he just needs to fill in all the information, choose a payment method, then give it to the landlords to sign for confirmation.
Mr. Nguyen Quoc An, an employee of a garment company at a rented house at 33 Dinh Cung Vien in Phuoc Long A Ward of Thu Duc City said that he is eligible for VND500,000 month support.
According to the regulations, employees working at enterprises will be supported at VND500,000 a person each month, while an employee returning to the labor market will be supported VND1 million a month. The maximum support period does not exceed three months.
Up to now, many localities have received a list of workers who need support from businesses. For instance, a leader of the Division of Labour, Invalids and Social Affairs in Go Vap District said that the unit estimates the funding to support employees who are working in enterprises and employees returning to the labor market is more than VND34.2 billion.
It is estimated that about 600-700 businesses with more than 20,000 employees are eligible for support. The Division has so far received a list of requests for support from 10 businesses with more than 700 employees.
Ms. Le Thi Anh Tuyet, Head of the Division of Labour, Invalids and Social Affairs in Cu Chi outlying district informed that through initial statistics, more than 46,000 employees working in enterprises in the district are eligible to receive support for accommodation with rent of VND500,000 per person a month.
Moreover, at the same time, nearly 8,000 employees returning to the labor market are eligible to receive rent support of VND1 million each a month. It is estimated that the total support budget in the district is about VND93 billion. Currently, the district has made a list and sent it to the Ho Chi Minh City Department of Labour, Invalids, and Social Affairs.
According to Head of the Division of Labour, Invalids and Social Affairs in District 8 Nguyen Minh Tri, approximately 10,000 employees working in enterprises in the district with indefinite-term labor contracts or definite-term labor contracts from one month or more are contracted and commenced before April 1. These employees have bought social insurance, 70 percent of them are living in lodging houses.
Thus, the number of employees eligible for accommodation support in the district is about 7,000 people. Along with that, about 400 employees returned to the southern metropolis to join the labor market. Currently, it is quite convenient to make a list and provide accommodation support for employees who have labor contracts and participate in social insurance.
However, staff of labor, invalids, and social affairs divisions in districts are facing difficulties in statistics and identification of all employees who do not participate in social insurance. These laborers who have not bought social insurance may be newly recruited employees, just returned to the labor market, or employees who are not eligible to participate in compulsory social insurance according to Clause 4, Article 2, Decree 115/2015.
Deputy Director of Ho Chi Minh City Department of Labour, Invalids and Social Affairs Nguyen Van Lam added that companies, cooperatives, and business households will transfer the accommodation rental support to employees' accounts according to the list approved by Thu Duc City People's Committee and districts. Employees who do not have an account at the bank will receive money directly.
According to the combined results from the report of the Divisions of Labour, Invalids and Social Affairs of Thu Duc City and the districts in Ho Chi Minh City, nearly 1.2 million workers are eligible for rent support under the Prime Minister’s Decision 08. The total estimated support budget is more than VND2,097 billion. Specifically, an estimated cost of more than VND1,480 billion is allocated for supporting more than 987,000 employees who are working at enterprises and more than VND616 billion will be spent supporting more than 205,000 employees who have returned to the labor market.