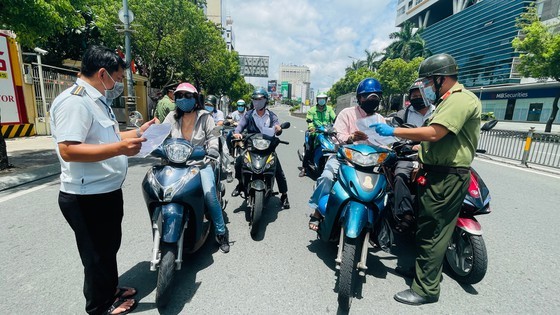 The functional force is checking people at the checkpoint on Nguyen Van Troi Street. (Photo: SGGP)

At the checkpoint on Phan Dang Luu Street in Binh Thanh District, the border between the districts of Binh Thanh, Tan Binh, Phu Nhuan, the police examined each vehicle passing, most of which are shippers. They discovered many violators of Directive 16 and asked them to turn back.

Similarly, at the checkpoint on Vo Van Tan Street in District 3, the functional agencies strictly punished anyone traveling without a necessary purposes. People showing a certified pass but going to wrong direction or shippers carrying unessential goods or merchandise with no formal order into District 3 are not allowed to pass.

At many checkpoints in Phu Nhuan District, the police had to explain the logic to shippers who objectedly said that they did not know the content of the packages. At last, those shippers understood and signed in the violation record.

According to Tran Huu Loc, an officer in the Urban Security Management of Phu Nhuan District, only in the morning of July 26, there were 20 violation records of people going out for unnecessary purposes, many of which belonged to shippers with unessential items. Besides giving fines, the functional force also explained in detail the regulations and reminded them to stay at home unless in emergency or for buying essential commodities.

Chairman of the People’s Committee of Go Van District Nguyen Tri Dung informed that his district establishes several patrol teams and sets up 12 main fixed checkpoints to punish anyone traveling on the streets unable to show regulated documents.

In District 11, there are 4 main checkpoints at the four borders with neighboring districts. In each ward, there are fixed checkpoints as well, along with its patrol teams to punish people going out with unnecessary purposes. Residents in the district receive a shopping card to do their grocery shopping twice a week on assigned dates. This is to minimize gatherings and people going out with unclear reasons.

Chairman of District 8 People’s Committee Tran Thanh Tung reported that his district has three main checkpoints located on Duong Ba Trac Street, Pham Hung Street, and Interprovincial Road No.5, together with 16  checkpoints in its 6 wards. Its patrol teams take turn to check around all streets to pinpoint violators and fined 90 cases of people going out with unnecassary purposes, street traders.

The localities in Hoc Mon District regularly remind residents to stay at home as much as possible. The patrol teams of the district on July 26 fined over 200 cases of people going out without necessary purposes.

The police force in Thu Duc City besides patroling the streets for law violators cooperate with the medical team to perform quick tests on passer-bys. They have discovered many Covid-19 positive cases. In addition, the localities here use security camera systems and community Covid-19 teams to monitor people in medical lockdown areas. Zalo is also used to remind residents not to break the laws.