Making a statement at the conference, Mr. Nhan said that since early 2020, HCMC has implemented many major missions with the focus on Tet care and Covid-19 prevention and fighting operations. Among the obtained results, 715 out of 761 black spots polluted with garbage dump have been transferred into parks or playgrounds for children. He requested local authorities to continue handling the remaining spots and prevent garbage pollution from recurring in the places already converted into parks.

In 2020, the city will prepare for construction of 65 projects with the total capital of VND254 trillion (US$10.97 billion). The Government has permitted the city to apply the process to streamline compensation, site clearance and resettlement procedures so the city will be able to carry out projects faster than before.

At the event, vice chairman of HCMC People’s Committee Vo Van Hoan reported compensation and site clearance situation relating to the second metro line Ben Thanh-Tham Luong and the progress of building four stretches of Ring Rroad No.2. Of these, the stretch from Pham Van Dong street to Go Dua intersection started construction in December 2017 but compensation and construction have reached 64 percent and 42 percent of plan so far. 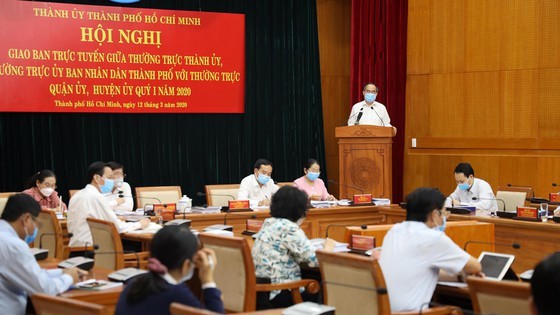 A view of the teleconference (Photo: SGGP)