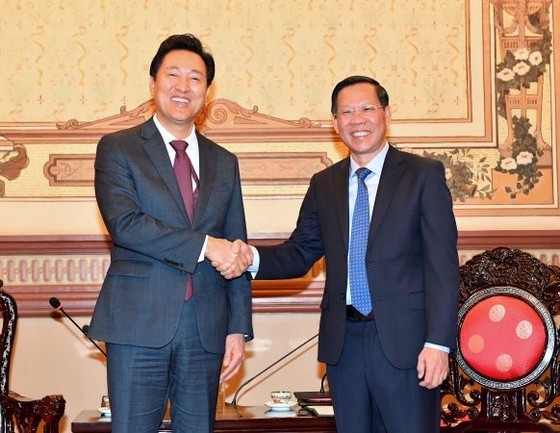 Mr. Phan Van Mai, Chairman of the People's Committee of HCMC, receives Mr. Oh Se-Hoon, Mayor of Seoul, South Korea. (Photo: SGGP)
At the meeting, Mr. Phan Van Mai expressed his delight at the good development of Vietnam - South Korea relations in many fields, especially after the two countries upgraded their strategic cooperative partnership in 2009. The Chairman of the HCMC People's Committee emphasized that, based on good bilateral relations between the two countries, relations between HCMC and the localities of South Korea also achieved many encouraging results. HCMC has, so far, established friendly relations and cooperation with seven localities of South Korea, including Seoul. South Korea is currently the third largest investor in HCMC, with more than 1,900 valid projects, with a total investment capital of US$5.3 billion.

Mr. Phan Van Mai hoped that Seoul would continue to strengthen cooperation and share experiences in the fields of urban management, smart traffic, staff training, start-ups, and innovation. The two localities collaborated, discussed, and launched tourism cooperation products and projects contributing to enhancing and promoting tourism. The Chairman of the People's Committee of HCMC affirmed that the city always creates the most favorable conditions for Seoul-based enterprises to invest and do business in HCMC. He suggested the Mayor of Seoul encourage Korean enterprises, especially those from Seoul, to actively seek cooperation opportunities with Vietnam in general and HCMC in particular.

Saying thank you for the warm welcome of the Chairman of Ho Chi Minh City People's Committee, Mr. Oh Se-Hoon highly appreciated the potential of cooperation between the two localities. The Mayor of Seoul affirmed that in the coming time, he would encourage and create favorable conditions for Seoul-based enterprises to invest in HCMC.

By Van Do – Translated by Gia Bao