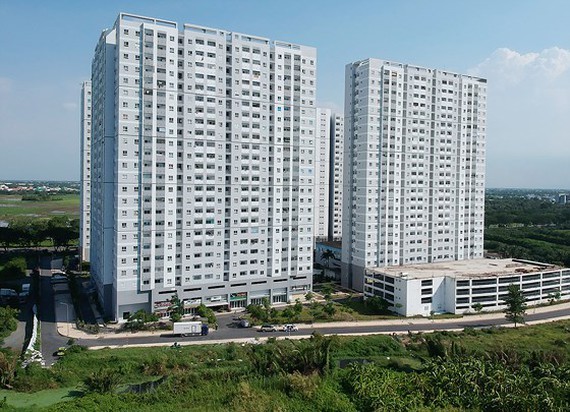 A social housing development in HCM City. The city is seeking US$1.66 billion of investment to build affordable housing for workers over the next five years. (Photo: SGGP)
According to a department proposal for 2021-25, the city will need 800.9ha for commercial housing and 173.5ha for social housing at a cost of VND239.7 trillion ($10.6 billion) and VND937.7 trillion ($41.6 billion), respectively.

Under the proposal, the city will build more than 18,000 affordable apartments to meet the needs of workers over the next five years.

These include five social housing projects for workers (4,352 apartments) in Thu Duc City with a total floor area of 220,436 square meters.

Five social housing developments (3,955 apartments) with a total floor area of 290,177 square meters will be built in districts 7, 12, and Binh Tan District.

Eight projects (9,594 apartments) with a total floor area of 546,170 square meters will be developed in suburban districts Binh Chanh, Hoc Mon, Nha Be, Cu Chi and Can Gio.

Speaking at a recent meeting, Secretary of the HCMC Party Committee Nguyen Van Nen said the city planned to build one million affordable units to replace aging and low-quality housing for low-income people.

He said it would provide land to enterprises to build housing near industrial parks and export processing zones for the workers.

Thu Duc City last month began a social housing project with 1,000 apartments worth VND1.2 trillion as part of the city’s plan to build one million affordable units for workers.

About 1.3 million workers and laborers in the city need housing. Most of the workers live in rented rooms and spend 10-15 percent of their income to pay for rent, the department said.

The average worker’s housing area is only 14 square meters, costs VND1.6 million to rent, and is often shared by four people.

A number of projects to build social housing for workers have been implemented in Linh Trung I, Linh Trung II, and Tan Thuan export processing zones, Tan Tao Industrial Park, and in new industrial zones.

According to statistics from the department, the city has built 15 housing projects for workers, covering 47ha, since the end of 2019.

The number remains modest compared to the housing needs of millions of migrant workers in the city. The biggest challenge in building social housing for workers is the lack of capital and land.

According to the proposal, the city also plans to build residential complexes along the first metro line running 20 kilometers from Ben Thanh Market in District 1 to Suoi Tien Theme Park in Thu Duc City.

The new housing projects must align with the development of technical and social infrastructure and availability of land for public transport and parks.

They must also address city problems such as flooding and congestion, and improve city landscapes and residents’ quality of life.