The reception also saw the presence of HCMC’s leaders consisting of Chairman of the HCMC People’s Committee Phan Van Mai, Vice Secretary of the municipal Party Committee Nguyen Van Hieu, Chairwoman of the People’s Council of the city Nguyen Thi Le and Chairwoman of the Vietnam Fatherland Front of HCMC Tran Kim Yen.
On behalf of HCMC’s leaders, Secretary of the municipal Party Committee Nguyen Van Nen emphasized that the visit aimed to further promote the Vietnam-Laos great friendship, special solidarity and comprehensive cooperation, and provide deep knowledge of the traditional relationship between the two countries to the young generation. It also marked the Vietnam-Laos Solidarity and Friendship Year 2022 as well as the 60th anniversary of diplomatic ties and the 45th anniversary of the Treaty of Friendship and Cooperation.
He said that the two nations have built relations in various fields and connectivity between HCMC and Laotian organizations for over 60 years; and highly appreciated the achievements of Laos and its localities over the past time. 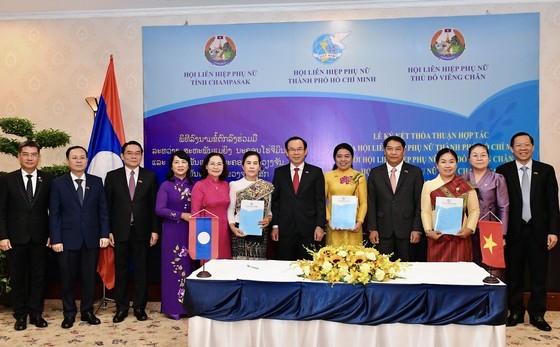 The Women Unions of HCMC, Vientiane and Champasak sign a cooperation agreement in the 2022-2026 period.
Mr. Nen believed the Lao People's Revolutionary Party (LPRP) will lead the nation to prosperity, success and confidence, and help the country affirm its position in the region and international arena.
The HCMC’s Party Chief stressed that the city will always create favorable conditions for students and officials of Laos to study and work, and encourage businesses to invest and participate in commercial exchanges with Laotian enterprises.
He hoped that HCMC would further promote ties with Vientiane, Champasak, Savannakhet and other localities of Laos in different areas, especially in the sectors of trade, investment, agriculture, education and training, contributing to the development of society, economy, culture, national defense and security, and maintaining political stability and international integration.
HCMC has promptly carried out programs that were signed by the city and the three Laotian localities in the visit to Laos taken by a delegation of HCMC high-ranking officials in May to celebrate the Vietnam-Laos Solidarity and Friendship Year 2022.
Leaders of Laotian localities highly recognized the traditional relationship between Vietnam and Laos in general, HCMC and localities of Vientiane, Champasak and Savannakhet particularly as well as extended their thanks to the government and people of the southern economic hub for support to assist Savannakhet and Champasak provinces in many sectors, especially in the Covid-19 pandemic.
On this occasion, the Women Unions of HCMC, Vientiane and Champasak signed a cooperation agreement in the 2022-2026 period.

By Do Van – Translated by Kim Khanh