The suggestion was made at meeting with a delegation from the city People’s Council about the progress and efficiency of major traffic works in the city.

On behalf of the city People’s Committee Mr. Tran Quang Lam, director of HCMC Transport Department, reported to the delegation that HCMC has built and completed major traffic works in strategic positions such as Tan Son Nhat Airport and Cat Lai Seaport. They have helped the city reduce traffic jam and accidents.

Currently, the city is focusing on large projects including those to build Nguyen Van Linh-Nguyen Huu Tho Intersection and Thu Thiem 2 Bridge, repair Nguyen Huu Canh Bridge and complete Ring Road No.2 and No.3 in the stretch from Go Dua Intersection to Pham Van Dong Street.

In addition, the city is doing procedures to invest in some works such as Ring Road No.2’s stretches from Phu Huu Bridge in the eastern outer belt road to Hanoi Highway, from Binh Thai Intersection to Pham Van Dong Street, from An Lap Intersection in National Highway 1A to Nguyen Van Linh Street and other projects such as the first phase of An Phu Intersection and a steel flyover at Bon Xa Crossroads.

However, construction of major traffic works has met with difficulties in site clearance and capital mobilization. Some projects under Public Private Partnership (PPP) form have not been carried out due to unclear regulations. Projects implemented by the Ministry of Transport in HCMC such as Ring Road No.3 and Ben Luc-Long Thanh Expressway have run behind schedule.

Director of HCMC Department of Transport Tran Quang Lam (Photo: SGGP)
According to Mr. Lam, for the last phase, budget funds arranged for projects approximated only 27 percent of the total demand. The funds for projects under PPP form reached as low as VND16,970 billion (about US$731 million) meeting only 13 percent of demand.

He proposed some measures to tackle the issue such as applying capital attraction and investment management mechanisms in association with Resolution 54/2017 of the National Assembly, boosting legal improvement for PPP projects to utmost mobilize sources of capital to develop road infrastructure. In addition, policies, mechanisms and procedures should be reviewed to speed up compensation progress in order to soon build and put works into operation to promote their goal and efficiency.

HCMC is now building a project to develop traffic infrastructure comprising of principals and norms to determine the order of priority for urgent projects built from the state budget such as Ring Road No.2 and No.3 and urban railway routes. 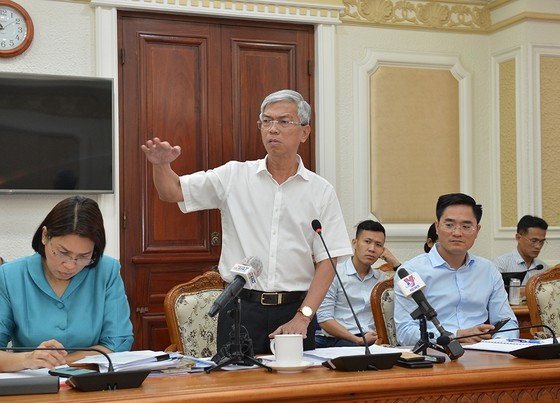 The city People’s Committee will focus on implementing specific mechanisms and processes to reduce time on compensation, resettlement and site handover in order to solve problems for residents and step up the progress of projects. Moreover, the committee will pay attention to making clear the role and responsibility of relevant sides in implementing projects and apply an inter-agency process and coordinate with ministries and central agencies for the task.

Quoting data from reports by HCMC People’s Committee, Mr. Pham Quoc Bao, chairman of HCMC Power Company and member of the inspection delegation, said that for the last five years, HCMC invested in and open to traffic 338km of roads. Of these, only 152km were built from the state budget. The remaining was from residential areas. This means HCMC built only 152km of roads accounting for 56 percent not 124 percent of plan.

According to Mr. Bao, the city should exclude these 185km to correctly estimate traffic development situation in the city because roads in residential areas have no big meaning for arterial traffic. He proposed the city to look into reality to have suitable solutions for traffic infrastructure development.

One of congestions in constructing traffic works is capital meeting only 35.7 percent of the total need of VND150 trillion (US$6.45 billion). So, Mr. Bao proposed to clarify other capital mobilization sources to visualize financial resources in the coming period.

In case the capital source fails to meet demand, the city should make clear how this affect the city’s Gross Regional Domestic Product (GRDP) to have appropriate solutions because traffic infrastructure has a great impact on economic growth, he analyzed and suggested mobilizing capital from commercial banks.