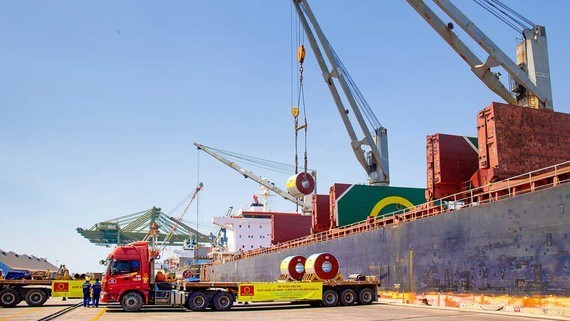 Can Gio Wharf area at the Cai Mep Estuary is at a location with favorable natural conditions in terms of channel depth and on international maritime routes that can accommodate container ships with a tonnage of 250,000DWT (24,000 TEUs) operating on routes to Europe, Africa, and America. Therefore, it has all the conditions to establish an international transshipment container port, creating a competitive edge with other countries in the region and a breakthrough in marine economic development for HCMC and the country.

Thus, the early construction of container ports in HCMC-based seaports in the 2021-2030 period is essential to meet the current and future import and export needs of HCMC in particular and the Southern key economic region provinces in general.

Previously, at a meeting with the Prime Minister, MSC/TIL Group wished to cooperate with the Vietnam National Shipping Lines – VIMC JSC and Saigon Port to develop an international transshipment port in Can Gio District. The Prime Minister welcomed the cooperation proposal of MSC/TIL and suggested the partner promote investment in the seaport sector, increasing the volume of transshipped goods in Vietnam. In addition, relevant ministries and agencies will create favorable conditions for MSC/TIL, VIMC, and Saigon Port to carry out the project. After signing the cooperative framework agreement, MSC/TIL Group, its Vietnamese partner VIMC, and Saigon Port quickly focused on implementing the work in the investment plan to build the port with a specific development program at the request of the Prime Minister.

At the end of 2021, the People's Committee of HCMC and the Ministry of Transport held a meeting to listen to the investor's report on the investment proposal for a wharf project with a scale of about 7.2 km, capable of receiving the world's current largest container ship, with a throughput capacity of 10-15 million TEUs and estimated total investment capital about US$6 billion. The project is divided into seven investment phases. The investor wishes to start the construction of phase 1 in 2024 and put it into operation in 2027. The final phase will be invested and put into operation in 2040.

The People's Committee of HCMC proposed the Prime Minister assign the Ministry of Transport to coordinate with it and relevant agencies to assess the advantages, opportunities, and ability to meet the conditions for the establishment of an international transshipment port.