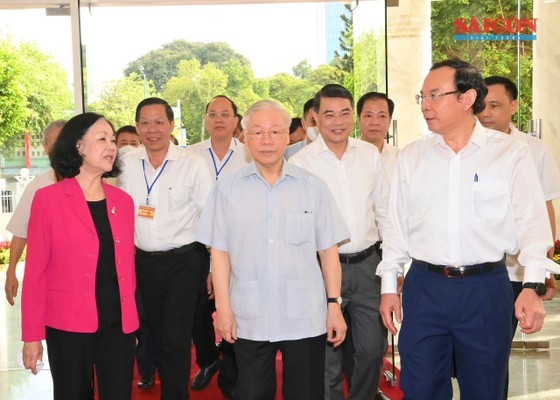 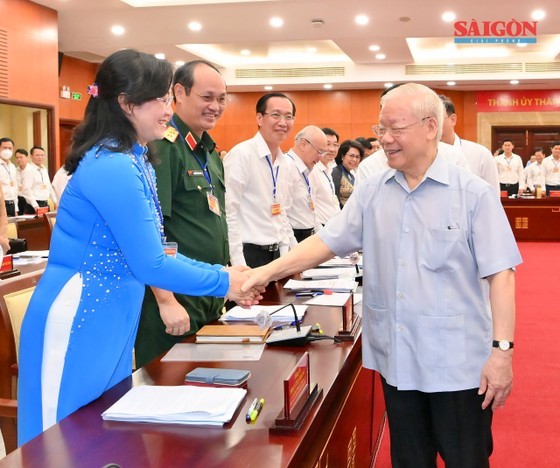 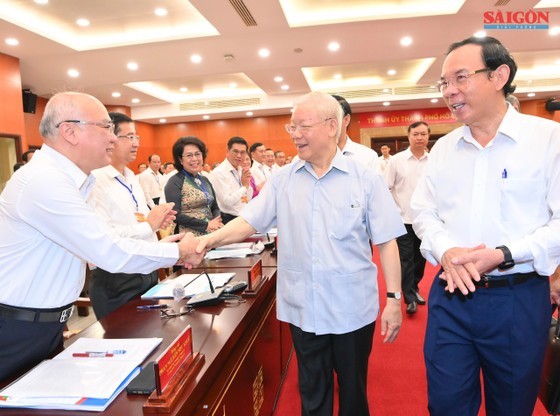 The scene of the meeting. (Photo: SGGP)
According to him, in 2021, the first year of implementing the Resolution, the city was affected heavily and severely by the Covid-19 pandemic. However, with the best efforts and determination, the HCMC Party Committee - Standing Committee of the HCMC Party Committee focused on leading and directing Covid-19 prevention and control, and at the same time carried out political tasks, achieving important results, contributing to controlling the pandemic, bringing the city back to the "new normal" state, gradually posting socio-economic recovery and development, while ensuring Party building activities following the Resolution.

The work of political thought has created positive changes, especially during the Covid-19 pandemic prevention and control period. The organizational work of officials and Party members has been paid attention to, attaching with the focus on renewing the leadership method of the HCMC Party Committee in the aspects of the organization of Party building and political system. The inspection, supervision, and enforcement of Party discipline are implemented in accordance with the situation of political tasks of the locality and units. 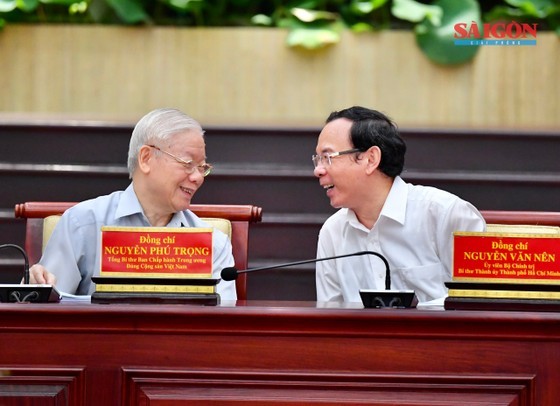 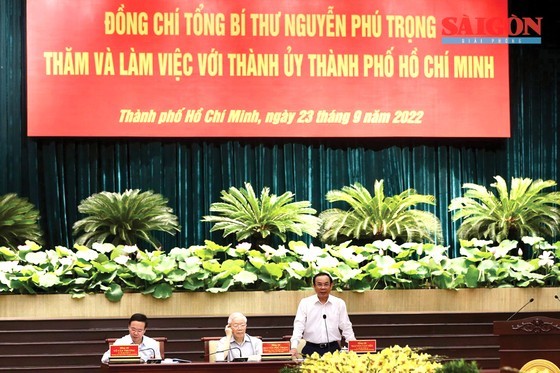 Mr. Nguyen Van Nen, Secretary of HCMC Party Committee, speaks at the meeting. (Photo: SGGP)
The work of building the government and mass mobilization has also received special attention, promoting their effectiveness and showing more clearly as HCMC focuses on Covid-19 prevention and economic recovery. Citizens have always joined hands to implement the city's guidelines and policies, such as the movement to donate land to build roads and widen alleys.

The scale and growth rate of industries and fields have basically returned to the same as before the pandemic. Total budget revenue in the first nine months of this year has exceeded 90 percent, equivalent to VND350 trillion. The import-export situation of enterprises has posted good growth. Trade, services, and tourism have recovered robustly, and FDI attraction has reached US$2.91 billion. 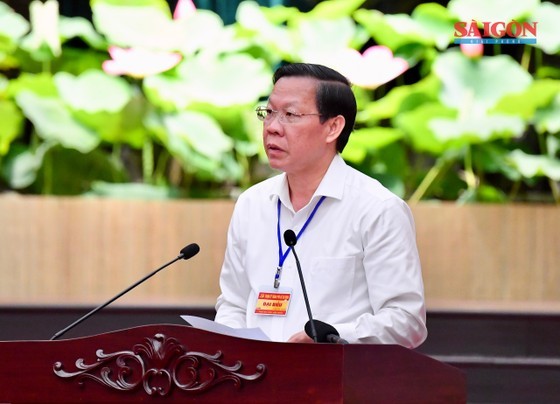 Mr. Phan Van Mai, Chairman of the People's Committee of HCMC, speaks at the meeting. (Photo: SGGP)
Mr. Phan Van Mai emphasized that in the past two years, the HCMC Party Committee always focused on leadership to innovate the city's governance, and find new driving forces for the growth and development of the city; concentrated on removing and solving institutional difficulties and obstacles, especially in the field of investment. At the same time, the HCMC Party Committee prioritized the implementation of urgent projects in health, education, social housing, environmental improvement, and key transport projects connecting the city with provinces in the Southern key economic regions; focused on mobilizing the maximum resources, attaching special importance to private investment, promoting the effectiveness of public-private partnership; strengthened leadership and direction to review and improve the efficiency of management and use of houses, land, and other properties attached to the land owned by the State.

Administrative reform, investment environment improvement, companionship with businesses, and the maximization of the efficiency of the city's investment resources have seen many innovations. Cultural, physical training, and sports movements and activities have been gradually restored, and the quality has been improved.

HCMC experienced four waves of Covid-19, of which the most severe is the fourth wave caused by the Delta variant (from April 27 to the end of September 2021). The HCMC Party Committee - The Standing Committee of the HCMC Party Committee mobilized the whole political system to participate and gathered the consensus of citizens and the support of localities and international friends to overcome the pandemic and take care of people's lives.

Besides the achieved results, the Chairman of the People's Committee of HCMC also acknowledged that the implementation of some projects and programs under the Resolution of the 11th Party Congress of the HCMC Party was slow. Some infrastructure construction projects have not been carried out or are behind schedule. The heavy impact of the pandemic caused many socio-economic indicators to fall sharply in 2021. Although they have recovered now, the general target of the tenure will be affected.

Based on the results, difficulties, and limitations in the past time, HCMC has determined that, from now until the end of the tenure, it will focus on Party building, government building, and mass mobilization, which includes the effective deployment of the Action Program for the Resolution of the 11th City Party Congress on building Ho Chi Minh cultural space.

In leading and directing socio-economic development, national defense, and security, HCMC will continue to adopt solutions to control and flexibly adapt to the Covid-19 pandemic, as well as recover and develop the economy in line with the situation.


On behalf of the Standing Committee of the HCMC Party Committee, Mr. Phan Van Mai proposed the Politburo, the Secretariat, and the General Secretary continue to pay attention and direct the direction and tasks for the city's development until 2030, with a vision to 2045. Specifically, the focus is on strategic orientation, guidelines, and mechanisms for HCMC to promote its potential, strengths, construction, and development. The Central Government will continue to choose HCMC as a pilot site for new problems that arise in the development process, but there are no regulations, or the current regulations of the State are no longer appropriate.

At the same time, the Central Government will expand hierarchy and decentralization in some areas to increase the autonomy and responsibility of the city. Moreover, the institutions for Thu Duc City will be completed suitably with the scale and role of the model "city within a city". There should be appropriate policies to promote potential and attract development resources, including the International Finance Center in HCMC, following the spirit of the Resolution of the 13th Party Congress.