He was speaking while attending a meeting with Binh Tan District to review the political achievements after its 12th Party Congress and to address current issues for sustainable socio-economic development. 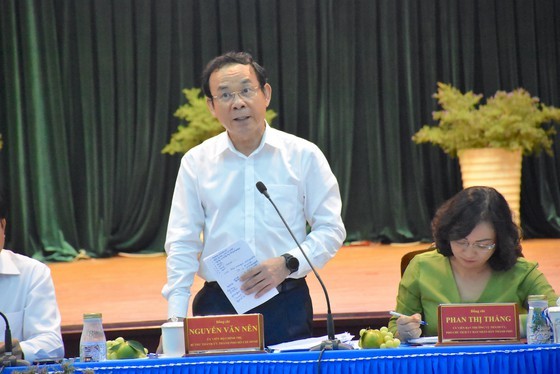 In his speech, Secretary Nguyen Van Nen highly appreciated all achievements that the localities and residents of Binh Tan District have made so far, especially the completion of the poverty reduction program ahead of schedule.

He also praised the upgrades of 32 streets, 640 alleys, as well as the alleviation erasure of 24 traffic bottlenecks and 9/12 urban flooding spots.

Regarding the tasks in the upcoming time, Secretary Nen stressed that the district should prioritize those related to Covid-19 prevention and the national election.

In addition, he commented that to implement the resolutions of the 12th Binh Tan District Party Congress and the 11th HCMC Party Congress, each state official must perform specific assigned duties with specific deadlines and political commitments, which will become the basis for performance evaluation.

There must be more checking and monitoring of the superiors to their inferiors to timely stop incorrect or illegal activities and praise effective ones.

Predictions reveal that in the next five years, the population of Binh Tan District will reach one million, leading to a need of proper development strategies and plans from the local authorities, especially in the aspects of traffic, urban flooding, environment protection, public security.

Secretary Thinh proposed that the municipal leaders should soon launch the three traffic projects, one sewage processing project, and one environmental improvement project in Binh Tan District to upgrade the living standards of residents here.

More importantly, Binh Tan District asked that the city authorities approve the research and adjustment of Go Cat Landfill in the general HCMC planning in order to increase the feasibility of investment attraction for the environmental improvement and land resource collection project there.

Vice Chairwoman of HCMC People’s Committee Phan Thi Thang in the meeting welcomed all recommendations from people in Binh Tan District. She then suggested that due to a limit of possible resources, the district should prioritize urgent matters that can be finished in the period of 2021-2025 in its formal proposal to the city.

The Vice Chairwoman saw sense in the Go Cat Landfill issue and promised that the city leaders will look into the matter, with a high possibility of assigning the HCMC Department of Planning and Investment to take charge of this investment attraction process for further development of the area.