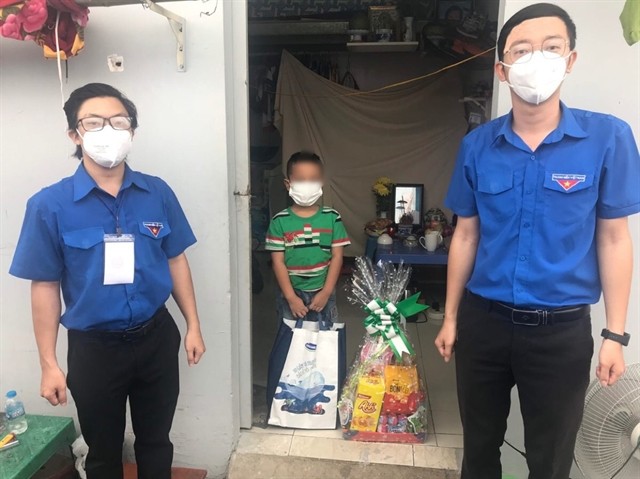 A young child from HCMC's District 8 whose parents died from Covid-19 receives food from local authorities and the steering committee of the local ward’s Ho Chi Minh Communist Youth Union. Source  http://www.thanhdoan.hochiminhcity.gov.vn/
The two children, who had also contracted Covid-19, were treated at field hospital No. 4 in Binh Chanh District. Before they were discharged, staff in the social welfare division of the City Children’s Hospital, which manages field hospital No. 4, called their maternal grandparents in the neighboring province of Dong Nai to pick them up.

In District 8’s Ward 16, another young child lost his parents to Covid-19. He is now living alone in a rented room without any caregiver. In the last few days, local authorities and the steering committee of the ward’s Ho Chi Minh Communist Youth Union have taken care of him while he waits for his relative from other provinces to pick him up.

As many as 1,517 children have been orphaned due to Covid-19, according to a report from the city Department of Education and Training released in an online meeting with the committee for cultural and social affairs at the city People’s Council on Tuesday.

“We sent the list of these children to the city Council of Ho Chi Minh Young Pioneers’ Organization to get financial sponsorship for their education through the 12th grade,” Huyen said.

“The district’s council has called on sponsors to provide scholarships and textbooks,” she added.

Truong Nguyen Phong, secretary of the Ho Chi Minh Communist Youth Union in Tan Binh District’s Ward 5, said: “The ward has been providing milk cartons twice a week to young children who have had a mother or father die due to Covid-19.”

“The ward has also presented orphaned children textbooks and notebooks, and have lent them laptops for online study,” Phong said.

The Tan Binh union has sent to the city-level union a list of names of children who need financial sponsorship through the 12th grade.

Nguyen Thi Duong of the city Social Welfare and Vocational Training Center for Young People said the center contacted local authorities and sponsors to provide medical assistance, food and cash for Covid-19 child patients and those orphaned by the disease.

The center also worked with psychologists to help children who had experienced psychological problems after the deaths of one or both parents.

Authorities in city districts were maintaining lists of orphaned children due to Covid-19. Binh Chanh District, for instance, was seeking sponsors to help them until they become adults.

The city Department of Labor, Invalids and Social Affairs said that children who had both parents die due to Covid-19 would receive a monthly subsidy of VND900,000 for children under 4 years old and VND540,000 for children aged 4 to 16.

They would be provided free health insurance cards, and exemption from tuition fees and other costs for studying until they are 22 years old.

Children who had a father or mother die due to Covid-19 while the other parent was still being treated in quarantine facilities were provided free rice, noodles, milks and cash of VND3 million – VND5 million (US$131-219) each.

Children who had contracted Covid-19 would receive a subsidy of VND80,000 each per day for meals during treatment courses at quarantine facilities or hospitals. They each would receive an additional VND1 million one-time only. The state budget would cover the cost for the treatment of the children.