He was speaking at a conference on socioeconomic conditions in August and the first eight months of 2019.

The Xuyen Tam project has been suggested by an enterprise for the last many years, hence the city will let it continue studying and reporting the project proposal. Afterward, investor selection must be organized through bidding.

Of four major industries, only electronics posted strong growth while three others namely food processing, chemical-rubber-plastics and mechanical engineering saw year on year reduction. Of these food processing grew only 0.4 percent while it was 7.3 percent during the same period last year.

Displeased at these, Mr. Phong said that the growth reduction had been warned two months ago and the city Department of Industry and Trade had been asked to analyze reasons and determine solutions but the agency leaders have not excellently fulfilled the task.

Formerly the growth rate of the four major industries was always higher than that of the entire industry but it has been continuously reduced in the first half of 2019. So Mr. Phong prompted the agency to work with relevant sides including HCMC Institute for Development Studies to define reasons and listen to businesses to draw solutions.

Deputy director of the Department of Industry and Trade Nguyen Phuong Dong attributed the decline to the US-China trade war. But Mr. Phong required to have specific analysis and evidences instead of general explaination.

Underlying missions need be implemented from now until the end of the year, Mr. Phong urged chairmen of districts to step up construction order restoration in the city in line with Directive 23 by the Standing Board of the city Party Committee and the plan of the city People’s Committee. Violations must be handled from the beginning. The Standing Board of the city People’s Committee will listen to the city Inspectorate’s report about verification results to the illegal construction of 110 villas in District 7 by Hung Loc Phat Company.

Referring to complaints about plan implementation of Thu Thiem new urban area in District 2 and Saigon Hi-tech Park in District 9, Mr. Phong said that the city People’s Committee has drawn a plan to seriously carry out the Government Inspectorate’s Conclusion. To implement the Conclusion’s part relating to Saigon Hi-tech Park, the chairman has had three meetings with residents, informed them of the city’s policy and recorded their opinions. Households agreeing with the city People’s Committee policy, HCMC will arrange resettlement land plots for them before November 30 this year. Those disagreeing with the policy, the city will continue listening to them, analyzing and solving problems.

Another important mission is speeding up disbursement for public projects, Mr. Phong required the Department of Planning and Investment to review projects about to start and complete before the congress of the city Party Committee, as well as those that will start after the congress in early 2021 together with investment methods.

According to Mr. Phong, buiding BT (Build-Transfer) projects has long faced difficulties so they have been transferred into public investment but this will lead to pressure on the state budget. For instance, only two sections of Ring Road No.2 costs as much as VND10 trillion (US$431.05 million) for site clearance and compensation which the city budget is unafffordable for. Hence the Department of Planning and Investment should reveiw and determine the list of budget funded projects in need of urgent implementation.

Aside from that, Chairman Phong required to step up breakthrough programs and prepare for seminars such as the ones on smart tourism and housing for residents in the city. 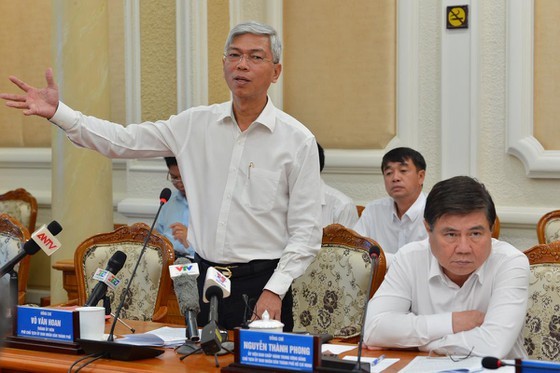