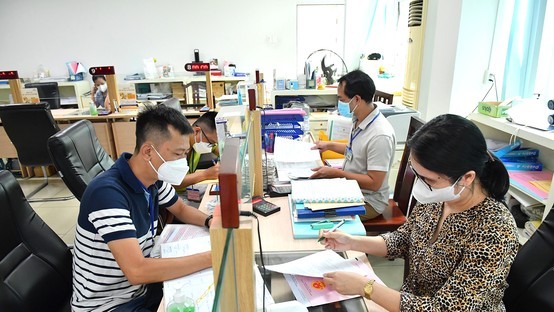 Public officials of the People's Committee of District 3 (HCMC) are handling administrative documents for residents. (Photo: SGGP)
“The locomotive” is slowing down

According to Professor - Dr. Nguyen Thi Canh, University of Economics and Law under the Vietnam National University HCMC, in 2019, the population of HCMC, excluding temporary residents, is about 9 million people. HCMC has the largest economic scale in the country, but in the past 2-3 years, due to the heavy impact of the Covid-19 pandemic, the city's economy had gone down. HCMC's GRDP reached 21.92 percent of the national GDP in 2015, 22.27 percent in 2017, 21.8 percent in 2020, and 20.12 percent in 2021. Regarding the proportion of budget revenue in the area, HCMC contributed 30.49 percent to the national budget in 2016, but it was only more than 24 percent in the past two years.

"HCMC's economy is going down with many indicators," Prof.-Dr. Nguyen Thi Canh emphasized. She added that in 2015, the export proportion of the Southern key economic zone accounted for 53.51 percent, and HCMC accounted for 16.77 percent. However, in 2021, this proportion dropped to 36.62 percent and 13.05 percent, respectively. The decline also occurred in the proportion of social investment capital of the region and HCMC compared to the whole country.

Prof. Dr. Nguyen Thi Canh said that Ho Chi Minh City needs to propose the National Assembly issue a resolution to replace Resolution No.54 to continue implementing specific mechanisms and policies to develop HCMC in the coming period, as the core of the Southern key economic zone.

Meanwhile, according to National Assembly deputy Truong Trong Nghia, amid the current geopolitical conditions along with conflicts and uncertainties in the world, HCMC and the Southern key economic zone must be a firm rear, ensuring the economic security of the country. One of the problems that Mr. Truong Trong Nghia raised was to review the concept of "the locomotive” of HCMC. In which, according to Mr. Truong Trong Nghia, HCMC must be affirmed as the locomotive of services and post-service economy, while the industrial economy will be developed in the surrounding provinces. Therefore, HCMC must develop in the direction of a creative economy, a digital economy, with the strength of high-quality human resources, capable of attracting high-quality human resources strongly.

“Regulating the percentage of budget allocation for HCMC from 18 percent to 21 percent or 23 percent to increase the budget is just a part of the solution. Another important thing is the spill-over effect and leadership of HCMC towards neighboring regions and areas," National Assembly deputy Truong Trong Nghia emphasized. He affirmed that HCMC must develop in the right direction to play well its role as "the locomotive". To do this, HCMC must have higher self-governing power than other localities in many aspects, commensurate with its contribution.

According to Ms. Pham Phuong Thao, former Chairwoman of the HCMC People's Council, for many years, a specific mechanism for HCMC had always been raised because, in reality, the management mechanism for HCMC has not been suitable for the nature and characteristics of a special city. Although HCMC has been considered by the Central government to have a specific mechanism, the "shirt" is still tight compared to the actual requirements. Meanwhile, appropriate policies and mechanisms are considered as support to accelerate development.

Ms. Pham Phuong Thao said that HCMC's growth rate had slowed down lately, partly due to the impact of the Covid-19 pandemic. In addition, it is because there are still many unresolved bottlenecks, such as institutions, infrastructure, and a shortage of resources. When there are suitable institutions and policies, HCMC will have favorable conditions to attract investment. When the rate of budget allocation for HCMC is at a reasonable level, the situation of flooding and traffic jams will be resolved soon. In 2022, the budget allocation rate increased from 18 percent to 21 percent, while it was 33 percent in 2003. Large cities worldwide can keep up to 46 percent of budget revenue, with the lowest level at 33 percent.

Ms. Pham Phuong Thao said that, in the long term, it is necessary to study and develop the Urban Law, in which, there should be chapters on special cities, such as HCMC and Hanoi, to avoid the case of too many specific mechanisms. However, in the context that amending and supplementing the law takes a long time and the development requirements are urgent, a normative document, such as a resolution, is appropriate.

According to Assoc. Prof.-Dr. Tran Hoang Ngan, Director of HCMC Institute for Development Studies, the mechanisms for land management, investment, financial management, State budget, income policies, as well as talent attraction under Resolution No.54 is quite open. If it is fully implemented, it will create a new growth engine for HCMC. However, in reality, the implementation of the contents under Resolution No.54 over the past time has only achieved modest results, not as expected.

To create favorable conditions for HCMC to continue developing, Mr. Tran Hoang Ngan said that HCMC should propose the National Assembly issue a new resolution on specific mechanisms and policies for the development of HCMC so that issues that have been institutionalized in Resolution No.54 would not be interrupted. The new resolution needs to ensure the inheritance and continuation of the contents of Resolution No.54, which are still valid but have not been carried out in the past time. At the same time, additional content for State management of special urban areas will be added until the Special Urban Law is promulgated. A new resolution with a strong legal corridor and a more thorough implementation mechanism is what HCMC needs to develop freely at this moment.