NA Chairman Vuong Dinh Hue voiced his worry at the time the city had to endure the harsh Covid-19 outbreak last year, severely affecting both social and economic aspects. Therefore, the Politburo, the Government, and the NA have introduced various mechanisms, policies to support HCMC in its recovery process. 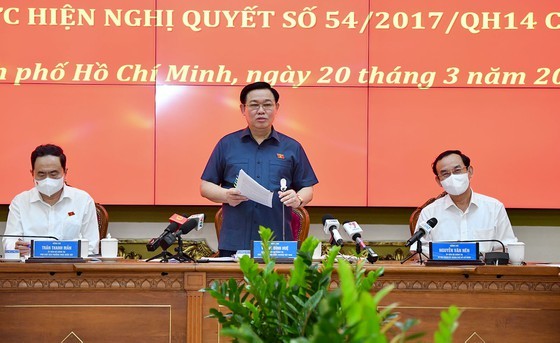 Chairman of the National Assembly Vuong Dinh Hue is delivering his speech in the meeting. (Photo: SGGP)
As a result, the total city budget revenues last year reached VND381,000 billion (US$16.62 billion), 4.5 percent more than the target; FDI investment attraction was $7.23 billion, an increase of 38.6 percent compared to 2020; exports was up by 2.8 percent compared to this time in 2020. Noticeably, the city economy has quickly recovered in the first two months this year, with some industries reaching the same level as that before the outbreak.

In addition, HCMC in 2021 tried to implement the theme ‘Year of Building Urban Government and Improving Investment Environment’. Last year was also the first one to operate the urban government model and Thu Duc City according to Resolution No.131 by the NA and Resolution No.1111 by the Standing Committee of the NA, respectively. Socio-cultural activities in the city were adjusted to suit Covid-19 prevention tasks, while social security, public security, and national defense tasks were all maintained, achieving impressive results. 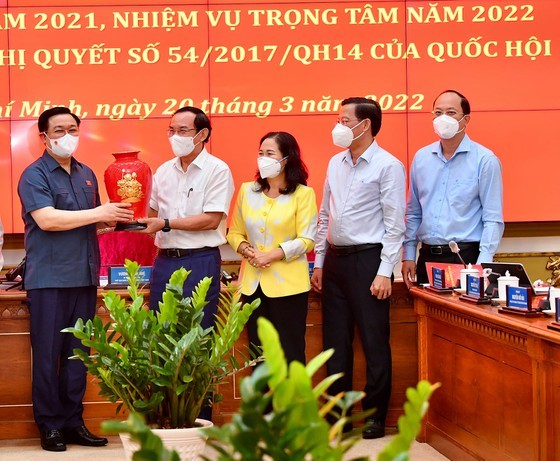 HCMC leaders are receiving the gift from NA Chairman Vuong Dinh Hue. (Photo: SGGP)
The NA Chairman praised all of these with such winged words as ‘be proud, be confident, be smart, be passionate, and be successful!’, saying that those achievements have displayed the city’s strong determination, close cooperation, and bold decisions to make breakthroughs in operation in order to overcome any possible obstacles. It is worth mentioning the enthusiastic support from other provinces, ministries, state agencies, and the Vietnamese overseas.

There are yet certain goals that cannot be met since the fourth Covid-19 outbreak has, to some extent, eroded the city inner power, leaving it facing tough challenges and forcing it to seek new resources for recovery.

Welcoming strategic proposals of HCMC, Chairman Hue suggested that the NA’s units and central agencies submit to the NA their own recommendations to aid the city to the fullest.

Then he asked that HCMC continue to rectify and develop the city Party Committee to form a clean and strong political system which is cooperative, unified, responsible, qualified in serving both citizens and businesses. Also, the city should focus on constructing the institution, strictly following the Resolution of the 13th Central Party Congress and Resolution of the 11th HCMC Party Congress as to socio-economic recovery and development. 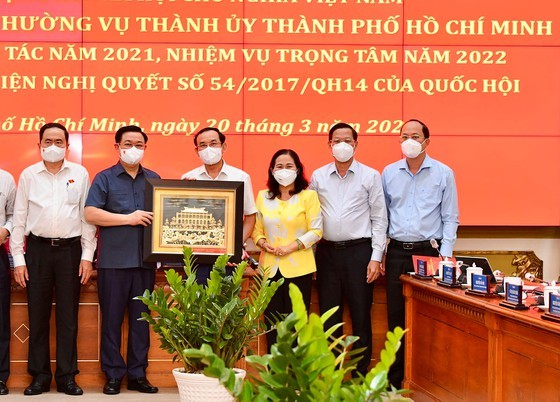 One last essential task for the city to finish is administrative reform to create a more favorable environment for investment and trading in order to increase its own competitiveness, along with high-quality human resources development. 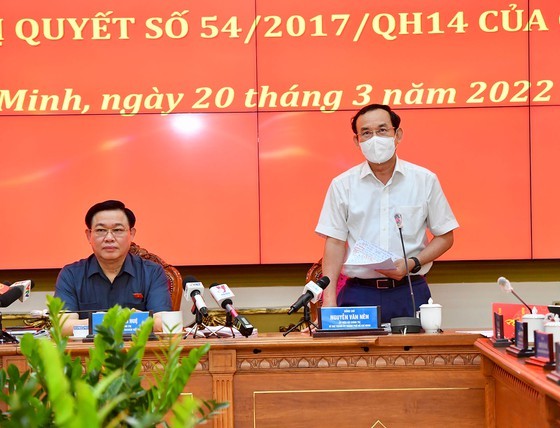 In the meeting, Secretary of HCMC Party Committee Nguyen Van Nen first showed his appreciation of the NA to the city via constructive discussions to tackle existing problems here.

He admitted that last year was an exceptionally difficult year for the city due to the pandemic mostly, and HCMC had to experience a negative development rate, which asks for much more effort and determination from the whole community and the municipal authorities now.

The city Party Chief then shared that most works lately, including Covid-19 prevention tasks, have encountered trouble due to limited legal regulations, with some even beyond the legal frames, mechanisms, or policies. Therefore, after this meeting, the city is going to prepare a proposal report to submit in the upcoming time.

Being the leader in the national economic growth, HCMC is confidently bouncing up despite its depleting state not too long ago. However, without suitable mechanisms and policies, the city can never fulfill its targets. Therefore, Secretary Nguyen Van Nen expressed his hoped that the NA will carefully consider the city’s proposals and deliver corresponding support so that HCMC can maintain its leading position in the sustainable growth of the country.