The leaders comprised secretary of the HCMC Party Committee Nguyen Thien Nhan, deputy chairman of the city People’s Committee Le Van Khoa and agency representatives.
At the meeting, chairman of the company’s board of directors Nguyen Tang Cuong said that coping with flooding in Nguyen Huu Canh street needed a smart pumping system, automatically removing garbage and soil while pumping water out from the street.
The company’s system designed with centrifugal pumps moves water from low to high ground at the capacity of 27,000-96,000 cubic meters an hour. The pumps operating with oil or electricity will be connected with the available sewer system of the city.
Investment capital will total VND88 billion (US$3.88 million). The company pledged that it will not receive money if the system does not work.
Director of the Department of Transport Bui Xuan Cuong said that the agency had collected opinions from experts and scientists about the feasibility of the project. Most of them said no doubts about the pumping ability of the system.
Still, they said that the street has been flooded because the drainage system has been damaged due to depression in the area. Therefore more surveys should be conducted to prove that the sewer system is able to receive water volume from the pumping system. The project should count locations to install pumps and environmental impact.
Mr. Cuong said that radical solution to solve flooding in Nguyen Huu Canh street is to upgrade the street and rebuild the drainage system.
The Department of Transport has assigned Urban Traffic Management No.1 to be investor of a project to repair Nguyen Huu Canh street, part of a priority program to reduce traffic jam in the phase of 2017-2018 with the total investment capital of VND473 billion ($21 million).
Deputy chairman Le Van Khoa said that previously a delegation of agency representatives led by the Department of Transport had visited anti-flooding pumps of Quang Trung company at its plant in Quang Ninh province.
He required agencies to urgently study the sewer system, water flow and pump installation locations within ten days before reporting to the city People’s Committee to decide.
Secretary Nguyen Thien Nhan said that the pumping system project must meet all relevant requirements to be implemented, stressing that it is unfeasible for the city to spend VND88 billion on the system now.
He suggested the company to rent the pumping service with a specific and clear price frame.
Below photos show Nguyen Huu Canh street badly flooded after a heavy rain on June 21: 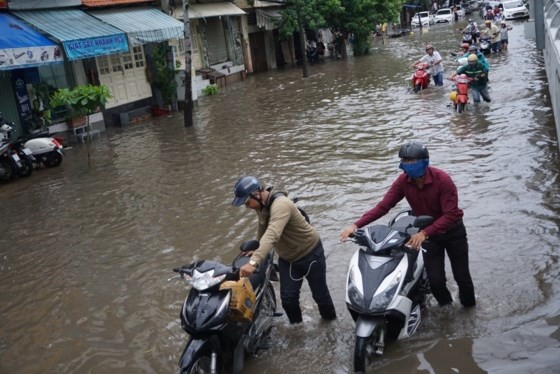 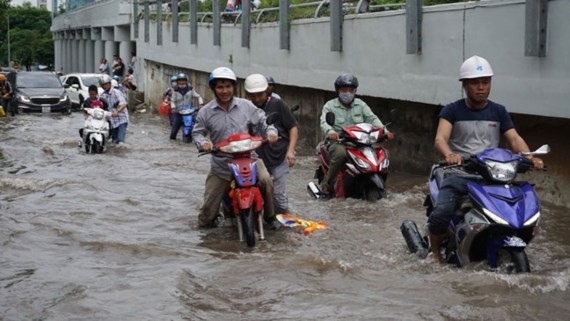 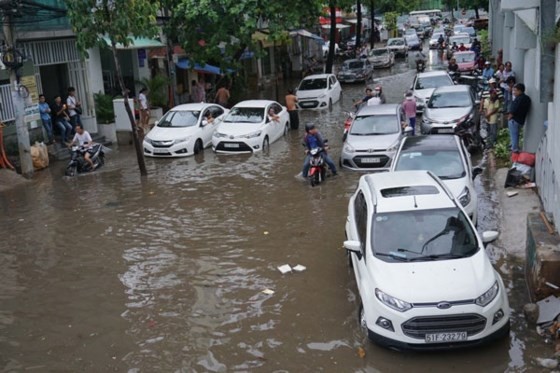