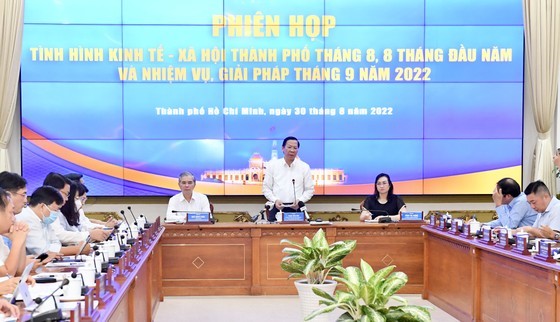 At the conference, Ms. Le Thi Huynh Mai, Director of the HCMC Department of Planning and Investment, said that the city's economic sectors continued to have good growth in August. Industrial production activities had recovered and attracted laborers to return to work. Many enterprises had effectively exploited free trade agreements to expand their markets.

Total State budget revenue in the first eight months of the year, excluding the additional amount from the financial reserve fund, is estimated at VND311.92 trillion, reaching 80.69 percent of the yearly estimate. By the end of July, the total disbursed capital of HCMC was more than VND8.47 trillion, accounting for 22.3 percent of the total allocated capital plan. 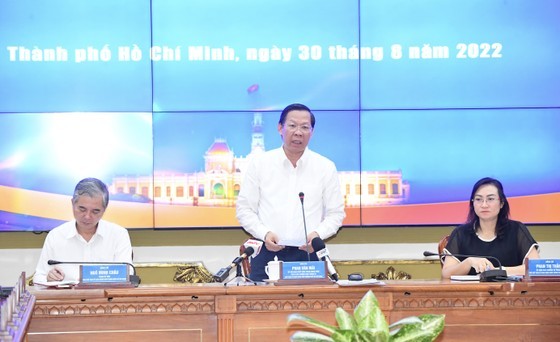 Mr. Phan Van Mai speaks at the meeting. (Photo: SGGP)
Mr. Nguyen Khac Hoang, Director of the HCMC Statistics Office, analyzed further that the city's economy recovered with many positive figures. The IIP in the first eight months of the year was 14.8 percent. Of which, four key economic sectors increased by 19.3 percent. Through the survey, 77 percent of enterprises said they are recovering positively.

However, compared to 2019 - the time before the pandemic, the IIP increased only 1.2 percent, which is a low level. Some industries with large proportions were still growing slowly. The retail sector climbed by 23.2 percent compared to the same period, which is very high. However, compared to 2019, it only advanced by 4.7 percent. Real estate still saw a low growth rate, while it is an industry with an extremely high spillover coefficient to others.

The Director of the HCMC Statistics Office also added that the bright spot of HCMC is foreign direct investment, which reached US$2.71 billion, the highest in the past five years. Newly established enterprises also rose by 33.4 percent. However, the capital scale decreased compared to the previous year, merely reaching VND11.9 billion per enterprise, while it was more than VND16 billion per enterprise in 2021.

Total dissolved enterprises account for 50 percent of newly established and reopened enterprises. It reflects that HCMC-based enterprises are also vulnerable to domestic and international difficulties.

The trade position is confirmed by the good growth in import and export turnover in the first eight months of the year. However, 62 percent of them are from the FDI sector.

State budget revenue reached 80.7 percent but mainly came from real estate and crude oil. Meanwhile, revenue from product tax to take into account for growth was only 3 percent. It shows the unsustainable factor in production.

Besides, the disbursement rate of public investment capital remained extremely low. The Director of the HCMC Statistics Office suggested that further evaluation is needed to improve this index and generate revenue for next year.

Director of the HCMC Institute for Development Study (HIDS) Tran Hoang Ngan said that the socio-economic results of HCMC in the past eight months are encouraging, and this year's targets can be achieved. 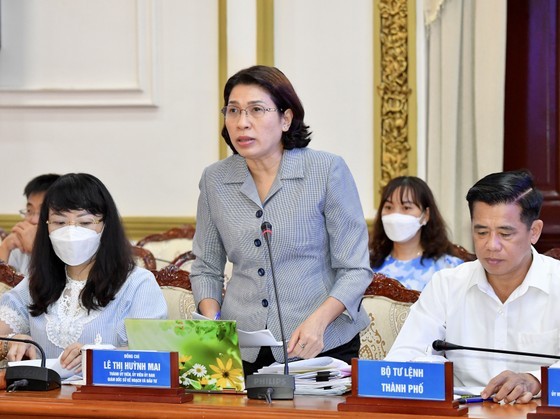 Ms. Le Thi Huynh Mai, Director of the HCMC Department of Planning and Investment, speaks at the meeting. (Photo: SGGP)
However, to achieve the goals set out by the Resolution of the 11th Party Congress of HCMC, he said that the city should promote public investment, in which priority is given to projects of social security, such as flood control and health and education projects.

Regarding the low disbursement rate of public investment, he said that HCMC is looking forward to the National Assembly increasing the capital allocation rate and public investment capital.

‘The city is thirsty for capital, but the capital in the plan is not disbursed well. The city must show the ability to absorb capital and use capital well,’ emphasized the Director of the HIDS.

Need to compare with the time before the Covid-19 pandemic

Chairman of the HCMC People's Committee Phan Van Mai noted that the socio-economic results in August grew rapidly compared to the same period last year. However, 2021 is the most difficult time of the city. Therefore, socio-economic results must be put in comparison with the time before the pandemic (2019) to see the actual results.

“Recovery results continue to maintain good momentum. The growth target of 6-6.5 percent set out for this year can be exceeded," said Mr. Phan Van Mai. He emphasized that the bright point is that HCMC can still control the pandemic, which is an important condition for socio-economic recovery and development.

According to Mr. Phan Van Mai, it will not only solve specific issues but also release spiritual energy.

Regarding the key tasks in September, Mr. Phan Van Mai emphasized pandemic prevention and control, focusing on vaccination against Covid-19. Currently, HCMC has a low rate of fourth injection and vaccination for children aged 5-12 years old.

He also directed to speed up enterprise support packages and rent support packages for laborers following Decision No.08. Currently, HCMC has paid over 50 percent. In addition, the disbursement of public investment capital should also be accelerated.

For issues that have not been resolved, Mr. Phan Van Mai asked the Office of the People's Committee of HCMC to review and remind departments, agencies, and districts to boost progress. 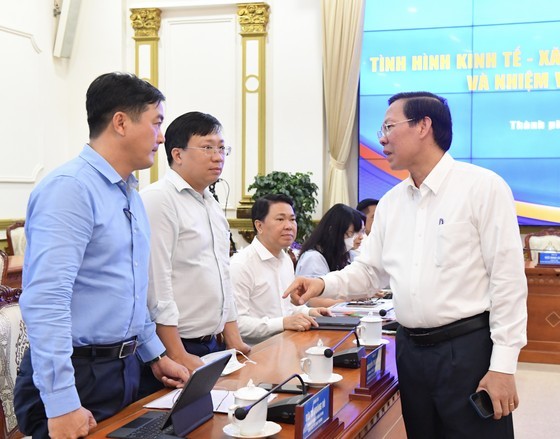 Chairman of the HCMC People's Committee directed that in September, agencies, units, and localities should focus on implementing key projects, including 29 traffic, urban, digital transformation, and smart city projects. The Ring Road No.3 construction project in September must hand over a boundary to serve site clearance and review the appointment of contractors and other procedures.

In the context that industrial production recovers slowly and even possibly goes sideways, Mr. Phan Van Mai suggested focusing on developing trade and services. In which, the focus is on price stabilization, demand stimulation, and tourism development.

In September, Mr. Phan Van Mai directed to remove obstacles for waste treatment and flood control projects, at the same time, prepare to submit the project dossier of the HCMC - Moc Bai Expressway project, and prepare contents to be presented at the upcoming HCMC People's Council thematic meeting.

On this occasion, HCMC will also discuss 50 major projects of HCMC - practical works to celebrate the 50th anniversary of reunification.