The delegation surveyed and inspected the depot at Saigon Opera House, the tunnel connecting the depot and Ba Son and Phuoc Long stations and rail track installation near Phuoc Long station. Construction of these stations have nearly been built.
After the survey and inspection, HCMC leaders believed that the project will be built and put into operation at the end of 2020.
Talking to the city leaders, consultants and contractors said that the most difficulty now is approval for total investment capital adjustment and late payment to contractors of done items. These have caused the project run behind schedule. 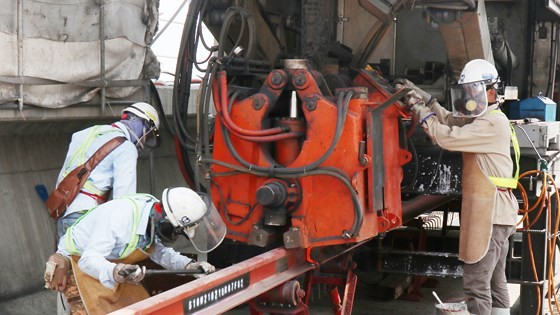 Wokrers on the construction site of the first metro line (Photo: SGGP)
The representative of NJPT consultant joint venture said that the largest consideration of the two sides now is the long delaying payment to contractors and consultants. They hope that the city will advance on its budget to make the payment until the project’s capital adjustment is approved.
Sumitomo-Cienco 6 joint venture said that the contract to build its bid package has expired since January last year so they hope that the city will extend the deadline and soon approve technical design documents to meet construction progress especially to Binh Thanh transformer station.
Ben Thanh-Suoi Tien metro line is the first project implemented in the city network of eight metro lines. This is one of significant major works to solve traffic congestion and development in the northern gateway to the city contributing to socioeconomic development.
So far, the project has completed 62.5 percent of the work volume. To obtain the target of building the project by 2020, chairman Nguyen Thanh Phong said that while waiting for capital adjustment, the city will continue working closely with ministries and central ministries to positively seek supplementary capital source to make payment to contractors and require relevant agencies to speed up disbursement progress. City leaders will periodically supervise the project’s progress and directly guide relevant sides to solve difficulties for the project as soon as possible.
He assigned agencies to support Urban Railway Management Board (MAUR) to do legal procedures on project adjustment, extend contract implementation time and consult the city on solutions to disburse for contractors.
He proposed consultants and contractors to focus on resources, work together with MAUR to implement the project and ensure safety, quality and progress in order to complete 80 percent of the work volume this year and the entire the project next year as per the resolution of the city Party Committee. 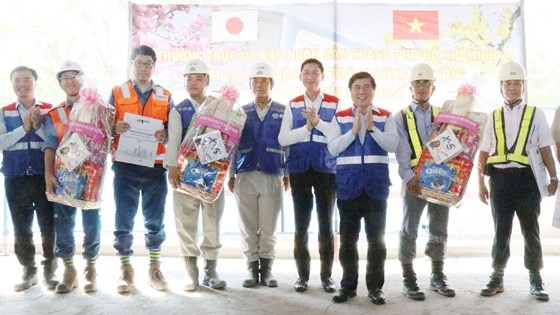 Mr. Nguyen Thanh Phong (R, 3rd) give presents to workers of Ben Thanh-Suoi Tien metro line on February 22 (Photo: SGGP)
According to HCMC People’s Committee, Japan is one of important economic partners of Vietnam in general and HCMC in particular. At the end of 2018, Japan was the fifth largest investor in HCMC with over 1,200 valid projects and total investment capital of over $4 billion.
Japanese Business Association in HCMC now has over 1,000 members. After reopening official development assistance (ODA) for Vietnam in 1992, Japan has become the largest ODA sponsor of the country with about US$30.5 billion. Many Japanese ODA funded projects have become symbols in the two countries’ friendship cooperation relationship including Ben Thanh-Suoi Tien metro project.