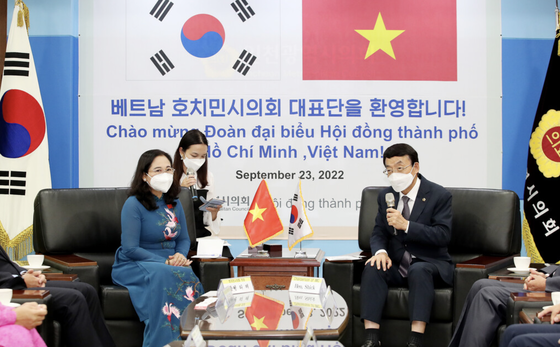 Chairwoman Le also informed the city’s key works. Apart from the international airports, the city has the Saigon River and the bustling port of Cat Lai, accounting for 40 percent of international cargo transported to Vietnam.
Additionally, HCMC is also implementing six urban railway routes connecting suburban areas and the city center. Besides, the city has the Can Gio Sea Encroachment Project. With the construction experience of a sea encroachment city, Ms. Le hoped that Incheon City would share its experiences and support Ho Chi Minh City to build and effectively exploit this project.

The content was stated by Deputy Secretary of the municipal Party Committee and Chairwoman of the HCMC People’s Council Nguyen Thi Le at the last working session between the delegation of the City People’s Council and Incheon City on September 23. 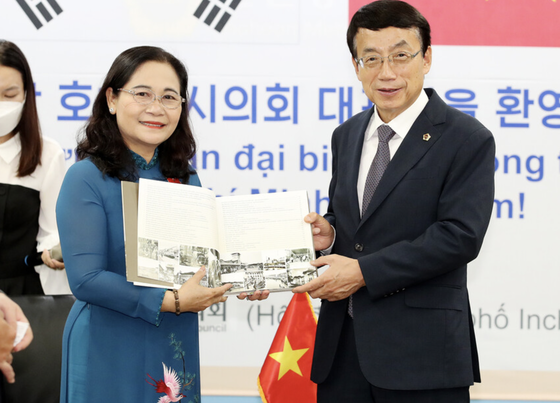 At the meeting, Incheon City Council Chairman Heo Sik emphasized that the visit of the HCMC delegation to Incheon City is essentially important, especially towards the 30th anniversary of the establishment of diplomatic relations between the two countries.
Chairman Heo Sik affirmed that the close and friendly relations between Ho Chi Minh City and Incheon have contributed to the economic development of the two countries as well as are a symbol of prosperity and success in the region. Mr. Heo Sik believed that this visit would give greater chances of success in the cooperation relations as well as solutions to help the two sides better in the upcoming time.

The city delegation pose a photo with members of Incheon City Council.
Speaking at the event, Chairwoman Le said that Incheon and Ho Chi Minh City have maintained a good relationship, exchange programs and cooperation promotion since the friendly cooperation relations between the two localities have been established since 2017.
In 2018 and 2019, the Incheon city government implemented the international health services support program to support the entire cost of cardiac surgery and treatment for HCMC children in South Korea.

On the same day, the delegation had a working session with the Management Board of the Incheon Free Economic Zone (IFEZ) which is one of the first three Korean Free Economic Zone. The delegates had a chance to visit the Smart City Operation Center and the Public Relations Center of IFFZ.