Speaking at the event, Politburo member and Secretary of HCM City Party Committee Nguyen Thien Nhan expressed his pride of honored persons and organizations. He highly appreciated the value of their work and outstanding contribution to the community.

Lieutenant Colonel Nguyen Van Tai, police chief of Tam Phu Ward in Thu Duc district is one of the typical examples. He is the initiator of “The gracious porridge pot” idea that cooks and distributes free porridge to poor patients in Thu Duc district’s Hospital.
Another honored people is Vice chairwoman of the People’s Committee of District 3, Vu Thi My Ngoc who has new ideas to promote innovation at the workplace.
397 honored individuals and units are models who are responsible for working and doing the work to the best of their abilities as well as contribute to the building and development of the country and HCMC, Mr. Nguyen Thien Nhan said. 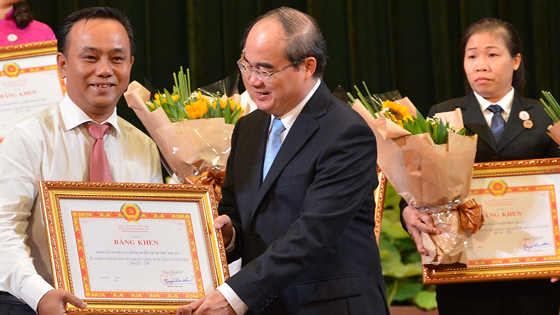