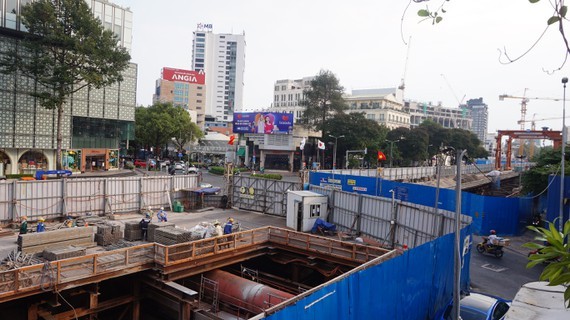 The project to construct the underground station for the Metro Line from Ben Thanh – Suoi Tien (Photo: SGGP)

Accordingly, HCMC People’s Council assigned HCMC People’s Committee to regularly monitor and timely propose adjustments for the medium-term public investment plan in HCMC for the period from 2021 – 2025 (taking from both the state budget and local one) to the Prime Minister, the central state agencies so that major region-connection projects can be launched as scheduled.

This plan is to be perfected gradually by HCMC People’s Committee, along with the completion of necessary investment procedures, to ensure nominators of those public investments are capable of using the allocated money.

The investment plan should focus on key industries and fields which are identified as the main development factors and on major projects to create links between regions. Projects on disaster and disease prevention, living standard improvements should also be concerned.

HCMC People’s Committee is asked to strengthen disciplines, clearly identify the responsibilities of each related organization or individual, and carefully check each project, especially newly launched ones, to ensure investment efficiency and their final outputs.

The proposal stated that the medium-term public investment will take VND6,957 billion (approx. US$302.4 million) and VND6,968 billion ($302.9 million) from the domestic and international central state budgets, respectively.

The total calculated public investment demand for medium term in HCMC will be about VND672,862 billion ($29.25 billion) for strategic missions for socio-economic development and planning of the city in accordance with the Resolution of the 11th HCMC Party Congress for the 2020-2025 tenure.

The city can satisfy nearly 39 percent of the medium-term investment demand from 2021-2025 by its own local budget.

Other important transition projects from the previous period of 2016-2020 are also mentioned in the estimated investment plan.

Truong Le My Ngoc, Deputy Head of the Division for Economy – State Budget under HCMC People’s Council, reported the examination on the proposal.

She mentioned in her speech the need of this estimate to strictly follow the approved missions, goals, and solutions in order to effectively finish the three breakthrough programs and the key program of HCMC in the period from 2020-2025, as cited in the Resolution of the 11th HCMC Party Congress for the 2020-2025 tenure.

In related news, this morning, the 10th People’s Council greenlighted a resolution about investment for the project to expand National Way No.50, with an expense of VND1,500 billion ($65.2 million). The project will work on a total road length of 6.92km for a duration of four years from 2021. It will take VND687 billion ($29.8 million) from the central state budget and VND812 billion ($35.3 million) from the municipal one.