The eight projects comprise construction of VND18 trillion North-South axis road, VND4,669 billion Nguyen Tat Thanh street and a VND869 billion southern road in parallel with HCMC-Long Thanh-Dau Giay expressway.
Chairman of the city People’s Committee Nguyen Thanh Phong estimated that banks’ loan commitment is a highlight of the city to solve capital shortage problem under the pressure of public debts and limited expenditure sources, create a diffusion to lure PPP investors in the upcoming time.
HCMC has mobilized every resources to carry out seven breakthrough programs. So far, there have been 647 investment stimulation projects with the total capital of VND41 trillion. Bank-business connectivity programs have provided 36,000 enterprises loans worth VND680 billion.
There are 153 projects carried out under PPP model in the city with the total funds of VND451 trillion. Of these, 23 projects have been built with VND71 trillion and 130 others are under construction with VND380 trillion.
Although the number of PPP projects in HCMC is not many accounting for only 5 percent of public investment projects but their capital is 51 times compared to the city’s public investment funds in the phase of 2011-2015.
Director general of HCMC Finance and Investment Stated Owned Company (HFIC) Pham Phu Quoc said that HFIC financed 152 projects in the city from 2010-2016 with the total funds of VND25 trillion, focusing on key fields such as urban traffic, education, health and water supply. Besides, HFIC has successfully raised VND26,851 billion local government bonds supplementing to development spending demand of the city.
Rebuilding old apartment blocks 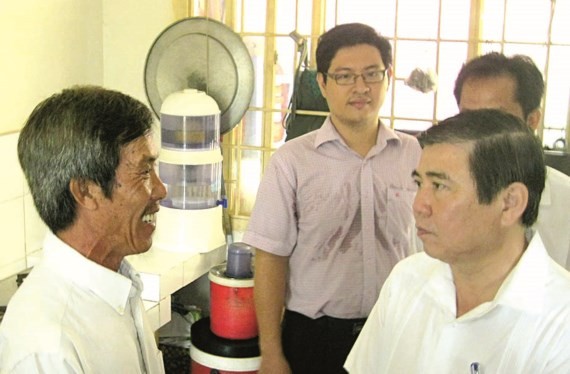 Chairman Nguyen Thanh Phong visits a household relocated under the city’s urban planning program in Binh Chanh district (Photo: SGGP)
HCMC leaders said that they were considering proposing the Prime Minister to approve the city to take the initiative in implementing the urban planning program along canals and appoint investors to attend projects in the phase of 2016-2020. They have considered basic norms to establish a project to remove and resettle households living alongside the south of Doi canal in District 8.
The city has had quality inspection results of 474 old apartment blocks built before 1975. Since early 2016, 1,592 households have removed from four apartment blocks. Lots A, B, C, D of Co Giang apartment block, District 1 and 134A tenement in Ly Chinh Thang street, District 3 have been dismantled.
City leaders have authorized Binh Thanh district to assess and approve compensation and resettlement measure for households in Lots 4-6 of Thanh Da housing estate. They have made a decision to authorize the city People’s Committee to implement missions relating to upgrading and repairing old tenements and building new ones to replace those built before 1975, issued a plan to carry out the program in the phase of 2016-2020.
HCMC needs about VND850 trillion ($37.4 billion) to efficiently carry out the seven breakthrough programs. Of these, traffic infrastructure, environment and anti-flooding fields account for 60 percent. HCMC budget has met only 20 percent of the number and that is big challenge for the city in the upcoming time.
At present, HCMC’s biggest advantage is high economic growth potential. However, the city needs specific budget financial mechanisms to ignite capital sources from credit institutions and leisure funds from residents to develop on a level with large cities in the world.
The city has committed to further improving business and investment environment, applying IT application, solving congestions in administrative reform, transparently allocating resources to create conditions for every economic sectors to access investment opportunities in the city.

By DO TRA GIANG – Translated by Hai Mien