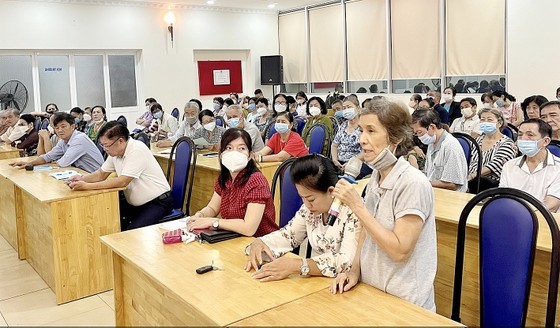 Residents in District 1 are expressing their opinions in the community meeting with the local authorities. (Photo: SGGP)

In a recent working session with District 1 People’s Committee, HCMC People’s Committee has mentioned the responsibility of district leaders in maintaining the security on roadsides and pavements by providing street vendors with a more stable site for business. However, some people with bad intention have purposely spreading the news that HCMC allows street vending on pavements, and that the local authorities are not permitted to interfere; otherwise, the concerned public can fight against the state task force for maintaining roadside security.

Aware of the wide spreading of this destructive fake news, leaders of District 1 and all wards have organized many informal discussions with the local communities to propagandize official directions of HCMC and correct wrong news. It has been effective to help the public more thoroughly understand the policy of the city.

Secretary of Neighborhood No.6 in Ben Nghe Ward of District 1 Tran Quang Tuan informed that the Party Committee of the ward always tries to timely update formal news for its members, while asking them as well as leaders of each neighborhood to closely monitor the status of news spreading in their area so that they can promptly stop and correct any wrong or fake news.

A practical solution for the local authorities to apply is to spread official policies by mouth via the help of neighborhood leaders, to post the news on formal websites of districts, and to use social network channels as the fastest communications method.

At present, District 1 is managing a system of multiple pages on popular social networks like Facebook, Zalo, and YouTube, called ‘Cot Co Thu Ngu’, in order to update official information from the State and Government. This system can also spread positive news of community members. It has effectively contributed to the fight against fake news of HCMC.

Similarly, in Binh Tan District, there are 138 groups and Fanpages on Facebook managed by the district to actively update formal news and positive stories, innovative business models of individuals and companies in the community. Other social networks have also been exploited to help the district reach out to residents, especially in crowded areas.

District 7 is also running many formal social network pages and channels for news propaganda purposes from district to neighborhood levels. More importantly, right now, the Party Committees of each apartment property and neighborhood are closely monitoring the status of news spreading in the community to collect problem reports and feedbacks from local residents for timely responses after verification.