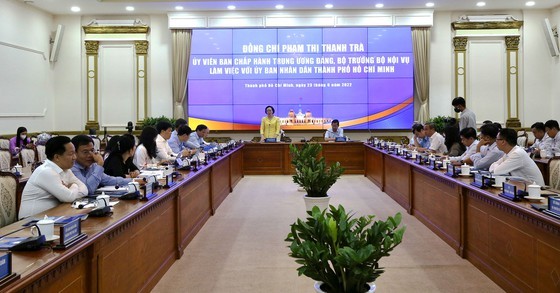 The working session between the delegation of the Home Affairs Ministry with HCMC People’s Committee (Photo: SGGP)

Director of the HCMC Home Affairs Department Huynh Thanh Nhan informed that at present, the total number of civil servants and public servants in the city according to the Resolution of HCMC People’s Council is 14,470 and 99,985 employees respectively, compared to the allocated quantity by the Central Government of 10,869 and 95,923 workers. The city has asked the Central Government to recognize these numbers for many years, but there is no approval yet.

As to difficulties in applying the urban government model, Director of the HCMC Finance Department Pham Thi Hong Ha shared that many districts and wards now do not use a one-leveled budget model, and thus cannot be active in spending, saving to fulfill the missions in their area. This also means more work for HCMC People’s Committee and Council. 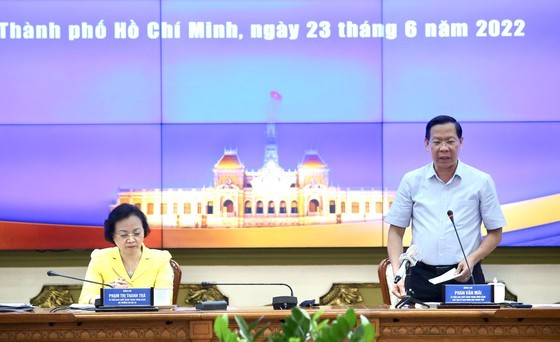 HCMC piloted the urban government model in 7 years, but under different conditions. When applying it for real, the city faced the fourth outbreak of Covid-19 and did not have enough time for full preparation. Thu Duc City was formed but also with limited operation mechanism, leading to current inadequacies that need urgent addressing. Therefore, the city is focusing on developing a more flexible legal frame to submit for approval, said Chairman of HCMC People’s Committee Phan Van Mai.

He added that the city is planning to review the gap of civil servant and public servant quantities between the reality and allocation for suitable solutions. As to administrative reform, HCMC is going to host conferences at the beginning of July to for measures to improve PAPI, PCI, SIPAS, Par-Index; connect to the national public service e-portal; offer more level-3 and level-4 public services online; launch a platform to monitor responses to the public’s feedbacks. 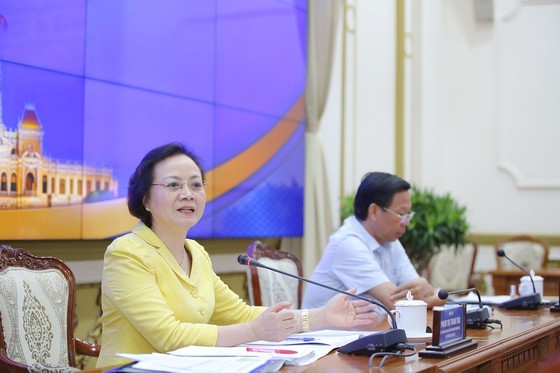 She then stressed that the difference in quantity of civil servants, public servants between the reality and allocation in HCMC must be properly addressed to implement the Central Government’s Resolution on downsizing state official number and simplifying the administrative structure. She asked that HCMC prepare a detailed justification report for the Center Steering Committee, along with feasible solutions.

The city is also requested to prepare a summary report for one year applying the urban government model, clearly detailing existing problems, most of which are related to decentralization, and proposed solutions. Discussing a possible resolution to replace Resolution No.54 and No.16, Minister Tra suggested that HCMC devise a clear mechanism for fully decentralization – the core to many matters now.

Simultaneously, the administrative structure must be streamlined to operate more smoothly to fulfill assigned missions. Related to this, HCMC needs to comprehensively review the promotion of financial autonomy, social resource mobilization to reduce the number of people receiving salary from the state budget while still having sufficient human resources for operation. 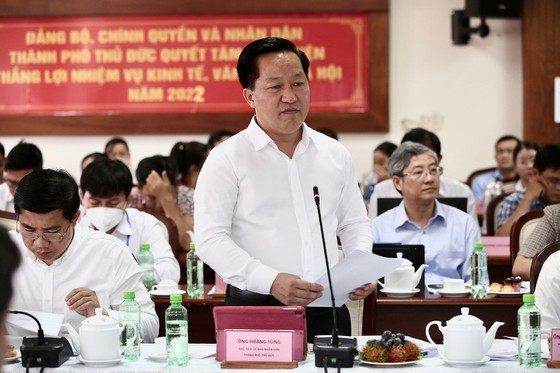 Although the administrative structure in the city is at the district level, it has to endure a much larger workload. In the first 6 months of 2022, it has received 17,100 administrative documents and over 44,000 land-related ones. With a population of 1.2 million, the work seems never ends, while the staff number have to decrease by 30 percent compared to the old quantity of 3 districts. 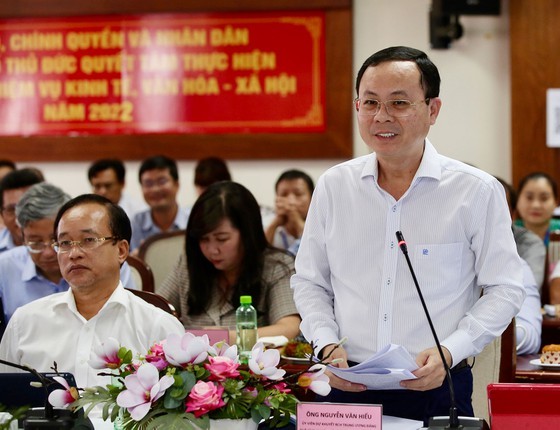 Therefore, Thu Duc City proposed that the Home Affairs Ministry allow the maintenance of the old quantity and contract signing with public servants to reduce workload pressure and ensure physical health of employees. Secretary of Thu Duc City Party Committee Nguyen Van Hieu emphasized that the economic benefits this human resources increase brings about is much more significant than the expense on them.

In response, Minister Tra said that her ministry plans to propose to the Central Government the total number of state officials for HCMC. Based on that, HCMC can actively decide a suitable number for each locality, including Thu Duc City.