Secretary of the city Party Committee Nguyen Thien Nhan affirmed the important role of HCMC which is regarded as the southern key economic center in the country.
The city contributes over 45 percent percent to Vietnam’s gross domestic product, more than 42 percent of the state budget, and 56 percent of the country’s total foreign direct investment project with a total investment value accounting for 45 percent of the country.
The city’s export accounted for 40 percent while over 60 percent of the amount remitted to the southern economic hub. Total market capitalization of the Ho Chi Minh City Stock Exchange (HoSE) is 93.5 percent.
These figures show the necessary of building a regional and global financial center in HCMC to meet the growing demand of the economic development of the country and HCMC particularly.
Demands in the financial sector will link closely to artificial intelligence (AI) and big data processing in the future, he added.
The municipal Party Committee’s leader highly appreciated Vietnamese firms that have got access to international capital markets thanks to application of fintech (financial technology) and AI in 2-3 years after establishment.
He asked the municipal authorities to continue to strengthen administrative reform, focus on implementing the smart city project, complete traffic infrastructure, boost anti-flood works, modernize plans for urban upgrade projects and speed up startup programs, especially the launch of 5G mobile network in the city.
The city’s Party Chief said that the People’s Committee of HCMC must complete the detailed project of developing the city into a regional and global financial center to report to the HCMC People’s Council, the city Party Committee and the Government in October.
Speaking at the meeting, Chairman of the municipal People’s Committee, Nguyen Thanh Phong stressed that the finance was determined as one of the nine key services of the city in 2001.
The HCMC’s financial sector currently sees an annual growth rate of 8.8 percent; accounts for 5.7 percent of the city’s gross regional domestic product and 10 percent of the nine key services. It helps the city mobilize some VND460 trillion (US$19.8 million) per year.
The shortage of proper mechanisms and policies; high-skilled human resources are major obstacles in building HCMC into a regional and global financial center, he added.
According to economic expert Tran Du Lich, developing HCMC into an international financial hub is a national task, not the city’s own mission. The Government should launch policies and guidelines to direct HCMC to carry out the project.
Meanwhile Dr. Vu Thanh Tu Anh, a member of the Prime Minister’s economic advisory group, stated that HCMC’s geographic location is a key advantage for developing services, thanks for nearing the country’s coffee and rice production centers. The city should concentrate on special markets to make differences and breakthroughs in the capital market. It can establish a commodities exchange center to serve the regional demand. 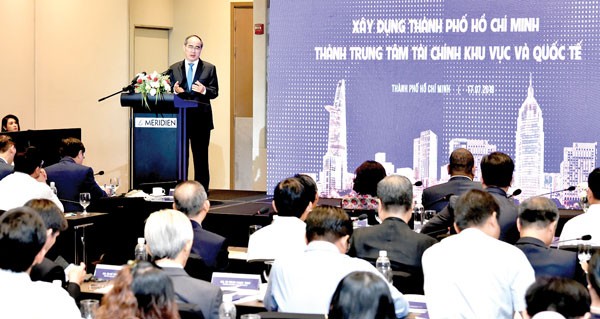 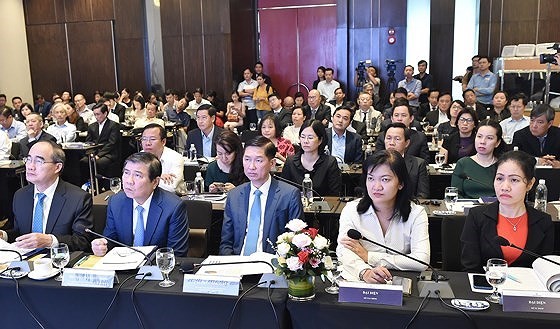 The meeting sees the presence of city's leaders and experts. (Photo: SGGP)