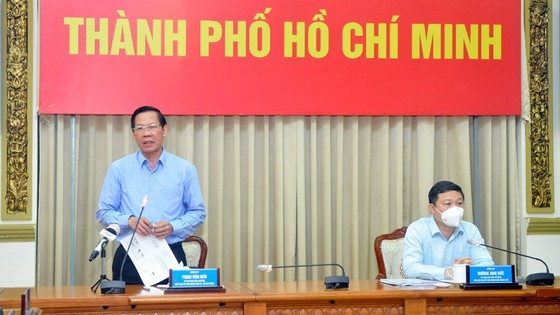 Chairman of HCMC People's Committee Phan Van Mai at the meeting (Photo:SGGP)
He made the request at an online meeting on January 27 held by the Steering Committee for Covid-19 Prevention and Economic Recovery in Ho Chi Minh City with agencies, districts, and Thu Duc City on epidemic prevention and control in the city.
Earlier, Director of the HCMC Department of Health Tang Chi Thuong announced on January 27 that experts of the Medical Association in HCMC studied and successfully implemented the Real-time PCR (MPL RT-rPCR) test method to detect and identify Omicron without the need of an expensive and time-consuming sequencing. The new PCR method proved to be highly efficient in Omicron-specific tests.
With this method, detecting Omicron takes only two hours, while sequencing the gene takes four days and costs only VND100,000 more.
According to Assoc. Prof. Dr. Tang Chi Thuong, MPL RT-rPCR solution not only has a lower cost but is also more sensitive than gene sequencing because the cases of low virus content cannot be sequenced, but MPL RT-rPCR is still detectable. 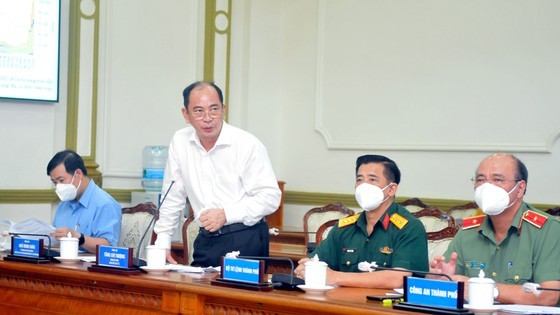 Director of the HCMC Department of Health Tang Chi Thuong speaks at the meeting (Photo: SGGP)
Currently, the Department of Health is coordinating with the Department of Science and Technology of Ho Chi Minh City to complete the research results and publish them in detail, said Associate Professor Tang Chi Thuong.
Speaking at the direction, Chairman Mai expressed his excitement when the city has kept the green zone for four consecutive weeks thanks to the efforts of city residents and healthcare workers at the grassroots medical centers in districts and Thu Duc city.

He expected that dwellers and medical staff would continue to join hands to maintain this result during and after the 2022 Lunar New Year, in order to create stable conditions for socio-economic recovery and development.
Mr. Mai directed districts and Thu Duc city to require administrations in districts, agencies, and units to ensure a safe Tet in terms of security, order, fire prevention, and safety. He also directed the health sector and the epidemic prevention and control forces at the grassroots to assign shifts to promptly handle unexpected medical situations.
Regarding vaccination, Mr. Mai requested that localities continue to administer vaccination throughout the 2022 Lunar New Year.
Regarding encouraging people to send their children to school in person, the Chairman of Ho Chi Minh City People's Committee emphasized that localities need to review facilities to prepare for students’ return to preschools, primary and secondary schools.
The Chairman also emphasized the preparation for Tet, especially taking care of poor and near-poor residents and social welfare brackets in Tet holidays, pensioners, and frontline forces.
According to Dr. Thuong, up to now, Ho Chi Minh City has recorded 92 cases of Omicron variant. The results of the community Omicron cluster survey in Ho Chi Minh City showed that the cluster of cases originated from a patient who returned to Vietnam from a foreign country and then infected others through close contacts. Currently, the health sector has put this cluster of infections under control.
Associate Professor Tang Chi Thuong assessed that the number of new infection cases and severe cases decreased sharply every week.
As of January 27, roughly 6,528 Covid-19 patients are under treatment. Some 4,341 of them are being treated at home while 80 others are at isolation facilities; more than 2,000 patients are in hospitals. In the past week, the number of deaths decreased to less than 10 cases a day. For instance, on January 27 alone, 11 deaths were recorded but seven of them were transferred from other provinces. 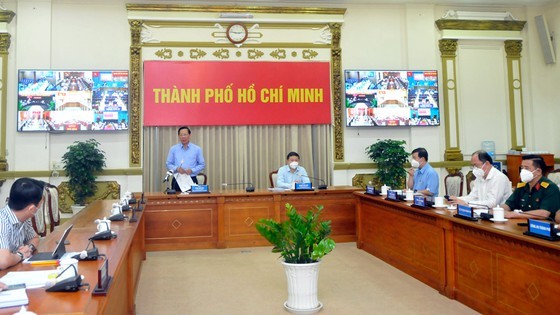 At the meeting (Photo: SGGP)
Carrying out a campaign to protect people in the risk group, Thu Duc City and 21 districts have tested the third phase for more than 512,700 people out of a total of nearly 647,600 people in the risk group.
Thereby, 139 more people with Covid-19 were detected, all of whom were promptly treated. To date, this campaign has updated the list of nearly 647,600 people in the risk group as well as carried out screening tests for more than 1.7 million people.
Regarding the vaccination situation, as of noon on January 27, more than 4.5 million beneficiaries have received the Covid19 vaccine third and second shots. The city is implementing a spring vaccination campaign throughout the New Year in 21 districts and Thu Duc city.
From January 1 until now, Ho Chi Minh City has nearly 15,900 people entering the country from foreign countries. Through screening tests, 198 people were found positive and gene sequencing results found 92 people positive for Omicron.
Speaking at the briefing, Vice Chairman of the Ho Chi Minh City People's Committee Duong Anh Duc said that currently, in some places, the speed of vaccination is slowing down; therefore, Mr. Duc asked localities to speed up the coverage of booster shots, convincing people to inject early.
On the occasion of the 2022 Lunar New Year, Mr. Duc suggested that the forces and localities have a plan to prevent large gatherings, especially at event venues such as Nguyen Hue Flower Street, Spring Festival.